A Bird In Hand

This is one of the great animal stories for kids with moral. Once upon a time, there lived a lion in the dense forest. He used to hunt all the animals for his hunger. One day, while searching for his food, the lion saw a small rabbit. He was playing under the tree. The lion started following him all his way. He was waiting for his chance to pounce upon the poor little rabbit.

While the rabbit was playing, he suddenly heard the sound which was coming from the nearby bushes. When the rabbit saw the lion, he ran for his life. But the lion sprang upon him and the poor little rabbit was soon in his powerful paws. Also read, The Dog And The Wolf. 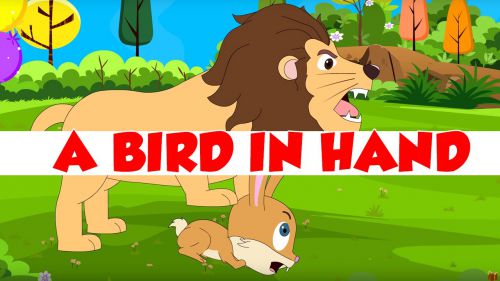 Before the lion could gobble up the rabbit, a deer came into the lion’s view. The greedy lion let the rabbit go and started to ran after the deer. The relieved rabbit ran happily into the forest. The deer ran really, really fast as the lion chased him and soon disappeared into the forest.

The lion lost the rabbit and did not manage to hunt the deer either. He cursed himself for letting go of the rabbit and to run after the deer. If the lion would have been satisfied with what he had, he would have surely filled his stomach.

MORAL: A BIRD IN HAND IS BETTER THAN TWO IN THE BUSH- IT MEANS YOU SHOULD NOT WANT MORE THAN YOU HAVE, AND BE HAPPY WITH WHATEVER YOU DO HAVE. BEING GREEDY MAKES YOU LOSE RATHER THAN GAIN.

Here is a visual depiction of one of the wonderful animal stories for kids, “A Bird In Hand Story”. See the video story below,

Tagged with: animal stories for kids, story for kids in english