A Father And His Two Daughters

Soon, the time had passed and the daughters reached to their marriageable age. Both of them were very beautiful. Their father married them to two honest young men and had chosen. The first daughter’s husband was a farmer and the second one’s husband a potter. Both of them were living happily with their husbands. Also, read The Old Man And His Sons. 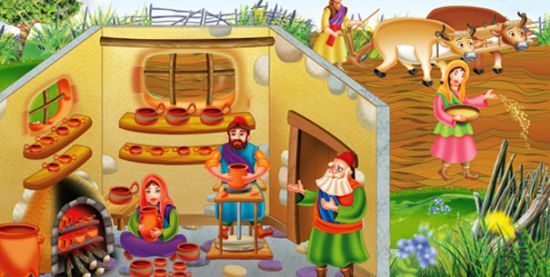 Image Source–> blog.lubans.org. One day, the father wanted to know whether his daughters lived happily so he went to the first daughter’s house. Elena and her husband looked happy. The father asked her daughter, “My dear child, do you need something? I will pray to the god for your wish.” The first daughter, Elena said, “I wish the rain to fall more often so that the crops will grow well.”

After Elena’s house, the father went to Selena’s house and asked her what she wanted. The second daughter said, “Daddy, I have only one wish. I wish the sun to always shine on our earthenware bowls so that they will dry up well.” Being in a dilemma, the father made a deep sigh.

If there are people who make profits, there are also others who suffer losses. The father was so confused so he asked Selena, “Your sister wishes for rain and you wish for a bright sun, with which one should I go and join my wish?” You may also like to read, The Milkmaid And Her Pail.

MORAL: YOU CANNOT PLEASE EVERYBODY AT THE SAME TIME.

Here is a visual depiction of one of the short fables for kids, “A Father And His Two Daughters”. See the video story below,