This is one of the best stories from Panchatantra for kids. A long time ago, there lived a businessman along with his wife. He was very rich and kind, too. There was always a long queue of visitors at his home. He was a good host. He was respectful towards all his guests and offered them the best of hospitality.

Once, he incurred heavy losses in business. People stopped coming to his place. Even their friends turned their back on them. The businessman was very sad because all of his efforts had gone waste now. Also, read The Kind Thief. 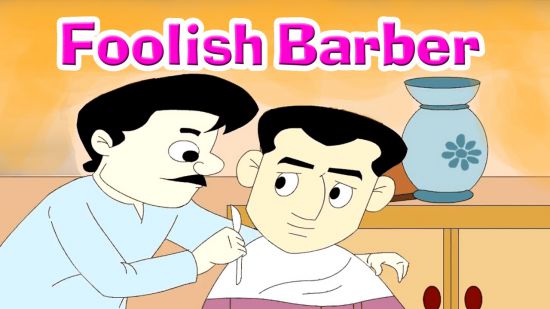 Image Source–> www.youtube.com. The businessman fell asleep thinking of all that had happened to him. He dreamt about a monk talking to him, “When you wake up in the morning, you will find me at your doorstep in the same body. You got to hit me with a stick on my head. I shall get converted into pure gold coins.”

When he woke up the following morning, he was wondering at his strange dream and thought, “Well, dreams are dreams anyway! They can never turn into reality.” He thought to tell this to her wife but then in his next thought, he decided not to tell her or else she would make fun of her husband.

Suddenly, there was a knock at the door. It was the barber. Hardly, he had started shaving the businessman’s beard, there was another knock. As he opened the door, he saw the same dream monk and he uttered to himself, “Impossible! This is the same monk I dreamt of last night.” He welcomed him and soon picked up a baton and hit the monk on his head. The monk turned into gold coins. You may also like to read, The Wise Mother.

Everyone was flabbergasted. The businessman decided to bribe the barber so that he does not disclose this matter to anyone. He gave the barber a few coins and the barber went away. While going back home, the barber started to plan something. He thought that the monks turn into gold coins.

The following day, the barber took out his stick and went to the monk’s temple. He found five monks outside the temple. He requested all of them to come to his house so that he could donate an Epic Book of Monks. As the monks reached his house, the barber closed the door. He started hitting them on their heads.

The poor monks screamed hard. The King’s guards heard their screams and came rushing. The guards went inside and heard some more sounds, “Oh! Save us! He is killing us!” The barber thought to himself, “No monk is turning into gold coins. All my hard work had been wasted.”

The guards caught hold of the barber. He resented going with them and pleaded not guilty. The barber narrated the whole story to the King and was really scared. “Call that businessman to the court,” commanded the King.

Soon, the businessman was brought to the court. The King asked, “I got to know about this barber that you hit one of the monks. Is that right?” “No Sir, I have not killed any monk. It seems like the barber has misinterpreted that incident.” The businessman narrated the whole story to the king. Also, read The Monkey And The Wedge.

The barber cried, “Oh! That’s why! None of the monks turned into gold coins when I hit them on their heads. How foolish am I that I acted without thinking.” The angry King ordered his guards to put the barber behind bars.

MORAL: DON’T BE A COPY CAT.

Here is a visual depiction of one of the great stories from Panchatantra for kids, “A Foolish Barber”. See the video story below,