This is the Foolish Tortoise Story In English for kids. Once upon a time, there lived a tortoise in a tank. He had his friendship with two swans. All the three lived together till evening everyday. They told and heard stories and enjoyed themselves. At sunset, they left for their dwelling places. Many years passed like this.

Once, there was a drought in that area on account of absence of rainfall. The rivers and tanks dried up. Men and beasts began to die of thirst. Many birds flew to other places in search of water. Both the swans also planned to go to such a place where there was no dearth of water. Before going, both the swans came to their friend tortoise to bid farewell. They said, “Friend! This tank is now turned into a muddy place only. How will you live here?” You may also like, Hare And Tortoise Story. 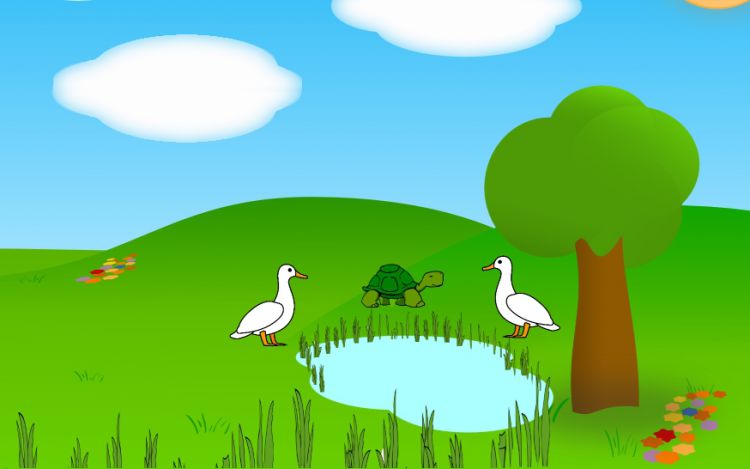 Image Source –> www.onlinestories.co.in. On hearing this, the tortoise said in a very desperate tone, “Friends! Without water, I shall not remain alive. Therefore, you should take me also with you.” The swan said, “Friend! We also don’t want to leave you here but we are not able to hit upon a plan. We shall fly to some other tank but how will you accompany us?”

At this, the tortoise spoke, “It’s true that I cannot fly, but I can tell you one thing that if you really want to save me. Do as I say!” The swans asked, “Tell us what we can do for you.” The tortoise said to swans, “It’s a very simple method. You bring a light strip of wood and hold its ends with your beak. I shall dangle by holding the strip in the middle. In this way, you can take me to the other tank.” The swans liked this proposal and they brought a light piece of wood.

Before flying, the swans cautioned the tortoise, “Buddy, we are ready to take you with us but you will have to keep quiet on the way. If not, you’ll fall with the strip and your bones and ribs will be crushed.” The tortoise said, “I will keep quiet throughout the way. I’ll not utter even a single word.”

After this, both the swans gripped the strip firmly with their beaks at each end. The tortoise also hung in the middle, holding the strip with his teeth. The swans soared high in the sky. While flying, both the swans along with the tortoise crossed fields, rick-yards, plains, and mountains. They were yet to find out a deep tank. Unluckily, they flew over a city which fell on their way. Also read, The Tortoise And The Eagle.

To see them, a crowd of city-dwellers gathered. It was a strange scene for them. They felt surprised and said, “Look! See! God knows with what kind of round-shaped thing these swans are flying in the sky. When the children saw them, they laughed and yelled.” When the tortoise heard this noise, he could not help speaking. “What kind of noise is this?” As he opened his mouth to utter these words, he lost his hold and at once fell down on the ground. The people of the city beat him to pieces.

MORAL: THOSE WHO DO NOT ACT UPON THE ADVICE OF THEIR WELL-WISHERS, ALWAYS MEET WITH A MISERABLE END.

Here is a visual depiction of, “Foolish Tortoise Story In English”. See the video story below,