A Miser And The Villagers

Here is a hilarious short funny story in english for kids. Once upon a time, there lived a miser. One day, a son was born to him. This made the miser very unhappy. “Now, all the villagers will be coming. I will have to give a feast to them. They all eat so much. What shall I do?” Suddenly, an idea struck on his mind. Five villagers came and blessed the little baby. Also, read The Man With The Coconuts.

The miser made them sit on the floor. Miser said loudly to his servant, “Place a plate before everyone.” The servant did so and placed a plate before all of them. Every plate had just two sweets. Seeing that, the villagers said, “Sir, Is this all? Shame on you, rich man.” 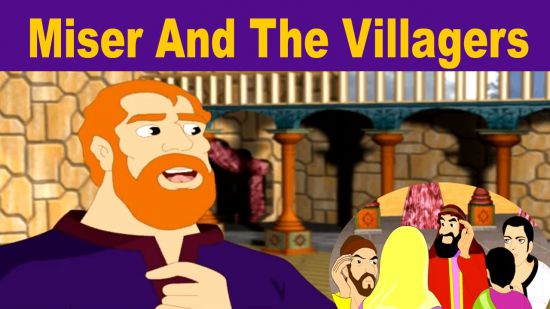 Image Source@ www.youtube.com. To this, the miser replied, “Nothing to worry, brother. Today, we are supposed to play a wonderful game. I know you are surprised to see just two sweets in each of your plates. Well, as soon as you eat both of them, we shall serve you another two and when you finish those two, you will be served two of more and so on it will go.”

The miser continued, “On the other hand, for every sweet you eat, you will be paid rupees ten. But you must eat the sweet without bending your arm at the elbow and without putting your mouth on your plate. Now you may please proceed.” “How can we eat without bending our arms? He is making fool of us. Even we cannot put our mouth to the plates. He is a miser, he has played a trick on us to save his money.” cried the villagers.

The miser thought that they would not be able to eat anything. One of the villagers was wise and came upon an idea. The villagers whispered into everyone’s ear. “Let them whisper. They can’t eat because there is no way they can eat without bending their elbows” laughed the miser.

All of a sudden, villagers had sat in a circle and without bending their elbows, they were feeding their neighbor. So, they ate and ate. “Stop! Stop! You have eaten enough,” cried the miser. At the end, almost each one had at least sixty sweets. One of them said, “My stomach is full and I have earned rupees six hundred also!” Other said, “I have earned rupees five hundred and fifty.” Another said, “I have earned only rupees five hundred and eighty.”

The miser cried, “Oh, this is terrible! I tried to save money and ended up paying out so much amount.” All the villagers laughed at him. Also, read The Wise Men Of Gotham.

Here is a visual depiction of this short funny story in english for kids, “A Miser And The Villagers”. See the video story below,