This is one of the great Akbar and Birbal short stories for kids. Once upon a time, Emperor Akbar fell ill. He could not sleep till the early hours of morning. The royal physicians tried various medicines without success.

Then, a Hakim suggested that the King should hear a story before retiring to bed every night, so that his mind might remain calm and cheerful and help him to fall asleep. “It seems a good suggestion,” said the king.” But who will tell me a story every night?” he asked. Also, read The Mango Tree. 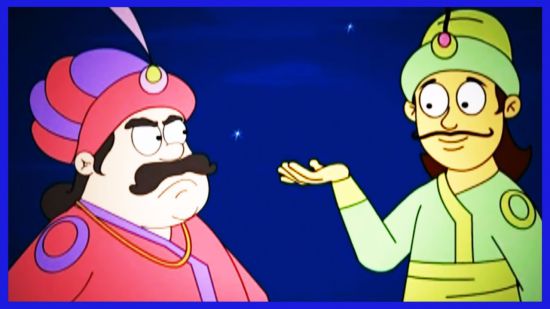 Image Source@ www.wn.com. “That’s easy, you have so many courtiers. Each one of them by turn can tell you a story,” suggested the Hakim. He accepted the suggestion and ordered his courtiers to tell him a story every day by turn. It became a problem to courtiers. Though they managed to tell a story, at the end of it the Emperor would always ask, “What next?” so the story teller had to tell another story. This went on till the story teller got tired.

So the courtiers approached Birbal and asked him to find a solution for this problem. Birbal asked them not to worry and he took it upon himself to go to the Emperor that night to tell him a story. That night, the Emperor welcomed Birbal happily. Birbal narrated a story to him. At the end of the story, the Emperor asked, “What next?” as it was habit.

Birbal told him another story. At the end of the story, Akbar asked again, “What next?” In order to put an end to this habit, Birbal started another tale thus, “There was a hut in a jungle. A hunter lived in it. In that jungle, there lived many beasts and birds. The hunter was capable of protecting himself from the animals. His problem was birds, they entered his hut and carried away food grains in their beak.” You may also like to read, The Water In The Well.

“As usual, the birds came to his hut, not finding grains anywhere, turned their attention to the basket. They started pecking at the basket, but only got themselves hurt. Among the birds was a little clever sparrow. A small mouse was sparrow’s friend. It asked the mouse to help them. The mouse nibbled at the basket and made a hole in it,” continued Birbal. “Is it, what next?” asked the King.

“The fourth bird went into the hut…” Birbal continued. “Oh, Birbal, how many birds are left?” asked the Emperor impatiently. “Your Majesty, so far only five birds have flown away. There are still four hundred and ninety-five birds left,” Birbal said calmly and continued, “So what I was saying- Yes, the sixth bird went inside the hut.” Also, read Tenali Raman And The Proud Priest.

Then Emperor got angry. He shouted, “Birbal when are these birds going to finish their task of carrying grain out?” “When you stop asking what next!” said Birbal. The Emperor realized his folly. He ordered that the programme of story telling to be stopped. By that time, he had regained his health.