This is a very short story about friendship for kids. In a village, there was a boy named Bob who lived with his mother in a small house. Every day after class, Bob went into the forest to pick up woods with his mother.

One day, on the way to the forest, Bob found a homeless puppy by the road. He looked so sad and miserable. Seeing how hungry the puppy was, Bob decided to bring him home to take care of him. You may also like to read, The Two Friends. 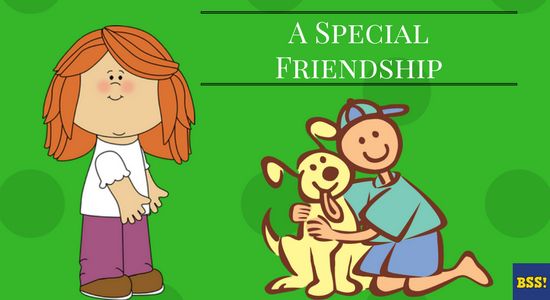 As he arrived home, Bob told his mother, “Mother, I found this puppy. Can we keep him?” Mother looked at Bob worriedly and said, “Our house is small and we are poor, too. How can we raise him?” “It’s ok mother! I’ll let him have a part of my meal and he can sleep with me!” replied Bob.

Seeing how much Bob cared for the puppy, his mother could not say no. She nodded. Bob was happy, he hugged and cuddled the puppy. Bob named the puppy Milo. Since the day he had Milo, Bob took Milo everywhere with him. They became best friends. Whenever he had snacks, Bob always shared a half with Milo.

After school, Bob took Milo into the forest to find woods. Then he took  ilo to the hills where they played football, stick catching and hide and seek. Evening came and both of them slept on the cranky bed and dreamt beautiful dreams. Also, read Four Friends Story.

One day, Milo was sick. So, he could not follow Bob to the forest. It was a rainy day and the road was slippery. On the way back home, Bob fell down a hole. Seeing how late it was when still Bob hadn’t come home, his mother hurriedly went looking for him with the neighbors.

The puppy joined the group. As he smelled the hole where Bob fell, he barked loudly to signal everyone. Knowing that Bob was down the hole, one of the neighbors ran to get the rope. Thanks to the rope, everyone managed to pull Bob out of the hole. Luckily, the boy wasn’t injured. Bob gratefully thanked everyone for helping him and hugged his puppy lovingly.

From then on, the friendship between Bob and Milo got stronger and stronger. You may also like to read, The False Friend.

Here is a short visual depiction of a very short story about friendship “A Special Friendship“. See the video story below,