This is Abraham and Isaac story. Once upon a time, there lived an old couple, Abraham, and Sarah. After many years of waiting to have a child, they were finally blessed with a baby boy by the grace of God in their old age.

Their boy was named Isaac. His name meant “he laughs”. Isaac was dearly loved and well taken care of by his parents. One day God decided to test Abraham’s faith in God.So he asked Abraham to offer his only son to Him as a sacrifice. Now, Abraham and Sarah were greatly saddened by God’s order. However, after much contemplation, they decided to believe in God and decided to sacrifice their only son. You may also like to read, The Three Wise Men. 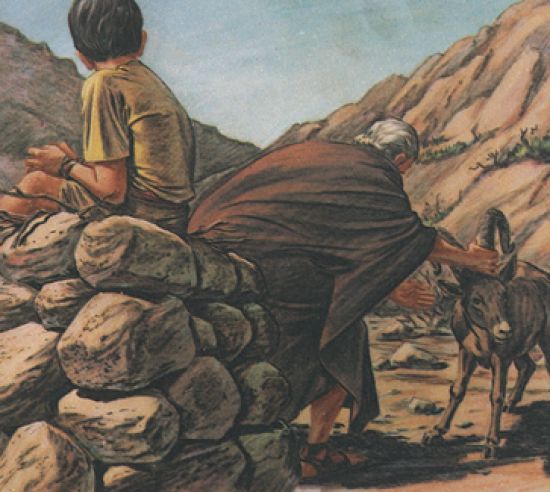 Upon reaching the spot, God has asked them to, Abraham began to build an altar. After the altar was built and he put wood on it, he tied Isaac to the altar. Even though Abraham’s heart was breaking and he could not stop crying, he still went about making the necessary preparations. Then Abraham took out his knife and was about to sacrifice Isaac. But before he could do so, an angel of God appeared. “You need not sacrifice your son. You obeyed God and his commands, and God loves you, Abraham,” the angel told Abraham. Also, read Jacob And Esau Story.

Abraham was relieved, but the sacrifice still had to be made. Just then a ram appeared out of the nearby bushes. Abraham sacrificed the ram and went back happily with his son. God said that He would bless Abraham and his family. God was pleased.