This is Abraham And Lot Story for kids. Abraham took all his possessions and headed North out of Egypt with Sarah and Lot. Lot was Abraham’s Nephew, and he followed Abraham when he left Haran.

By now, Lot was also very wealthy and had large herds of cattle and sheep and many servants. They traveled to a place and set up their tents between Bethel and Ai where Abraham had previously built an altar to worship God. This area was very fertile with gardens and grass for the animals to eat and rivers for them to drink from. Also, read Abraham And Sarah Story. 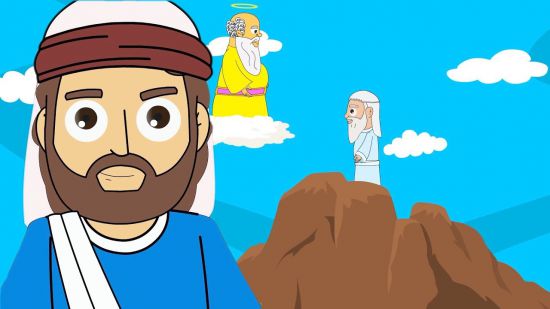 But Abraham’s and Lot’s herds of cattle and flocks of sheep living together meant that there were too many animals in one place. There wasn’t enough food and water to support both of their large herds.

The men caring for the animals began to argue with each other. Abraham’s worker said, “Our master is more important! His animals should get the food and water.” On the other hand, Lot’s workers thought that Abraham’s herds should go somewhere else so that Lot’s animals could have the food and water. Their arguing got worse day by day.

Abraham knew that this arguing was not good. So he went to Lot and said, “This arguing has to stop. After all, we are related. We need to get along with each other. You choose which piece of land you want to live on. Then, we will separate and I’ll take my family and animals somewhere else! If you want to move to some other place, I’ll stay here but if you want to stay here then I’ll move. It’s up to you!” You may also like to read, Abraham And Isaac Story.

Lot looked at the beautiful Jordan Valley. It had lots of grass and water. It was as beautiful and fertile as the land of Egypt and was the best land around. So, Lot chose the land for himself and for his animals. He moved his family, servants, animals, and tents near a city called Sodom. The people of Sodom were very wicked. They sinned against God by the way they lived. Lot didn’t care though. He knew it was the best land for his herds and flocks.

Abraham stayed in the land of Canaan. God said to him, “Look around you, look as far as your eye can see in every direction. I will give all of this land to you. It will belong to you and your children.” God wasn’t finished with his promises yet. He then said, “I’ll give you children. You’ll have so many descendants that you won’t be able to count them. So go for a walk and see your new homeland.”

Abraham did just that. Then, he built an altar and worshiped God. You may also like to read, The Rich Man And Lazarus Story.

Here is a short visual depiction of “Abraham And Lot Story”. See the video story below,