This is the Adam and Eve Bible Story for kids. After god made the earth, sun and the moon, god made man. And he was very proud of his creation. The man he created, he called, Adam. He gave Adam soul and life so that he could take the good care of the earth. He gave Adam a beautiful garden to live in which became his home. This garden was called Eden. Eden was a huge garden which falls river in it. Beautiful plants and trees started to grow in the garden like apples, oranges, strawberries and grapes. More about Adam and Eve.

Adam used to ate this whenever he was hungry. He drank water from the river whenever he was thirsty. God blessed Adam and asked him to take care of the garden and everything in it. Adam named all the beautiful birds and animals and also took good care of them. Adam spent all his days eating the fruits and playing with these birds and animals in his garden. But he was alone and sometimes felt quite lonely. Also read, Birth of Jesus. 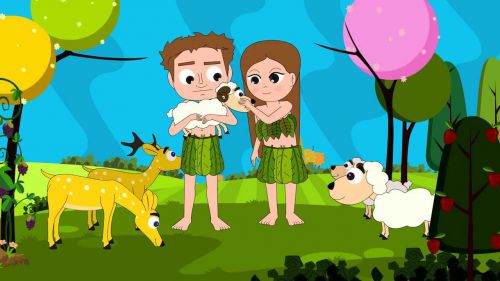 This made god really sad. He thought that he should probably create someone else, who would be Adam’s companion. So, he created Eve. Eve gave company to Adam and also helped him to take care of animals, birds and the garden. Eve was different from Adam and so, god called her a woman. Adam and Eve started to live in Eden. They played with the animals and birds. They together took good care of the garden. But god told them not to eat fruits from “The trees of knowledge.”

In the garden, there lived a snake. One day, the snake told them, if they eat the fruits from the trees of knowledge, they will became wise and intelligent like god. In excitement, they both ate the fruit from the trees of knowledge. The god became angry and punished them both by sending them in the earth. The god ordered them to leave the garden and told them to work hard. For Adam, he decided that he would grow crops and create food whereas for Eve, he decided that she would suffer the pain of giving birth. You may also like, The Creation Story.

Here is a short visual depiction of, “Adam and Eve Bible Story for kids“. See the video story below,