The Adventures Of Brave Eagle

This is one of the amazing short adventure stories for kids. Born many moons ago was a very pretty and brave Princess. She was named Brave Eagle. Her parents were very proud of her. She was a very special girl. She was kind to everyone and to all the birds and animals.

One day, when Brave Eagle was very young, a pack of wolves came into the Indian camp. The Princess was very brave and faced the wolves. She told her dog, Little Happy Dog, to save himself and run to tell the chief about the trouble. The wolves captured Brave Eagle and took her to their cave. The Princess was not afraid. She was kind to the wolves and the wolves liked her. The wolves decided to raise her as their own. You may also like to read, The Grateful Eagle. 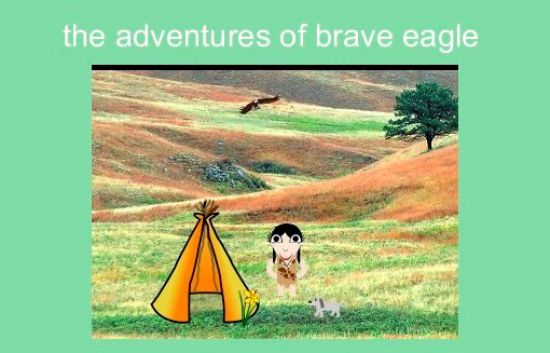 Image Source@ www.storyjumper.com. The wolves taught Brave Eagle everything they knew. They showed her how to track animals and how to hunt. They taught her about family life and how important it is to help each other. She taught the wolves how wonderful the humans can be.

One day, when Brave Eagle and the Wolves were playing in the flower field, Little Happy Dog showed up. He had been searching for Brave Eagle for many months. Brave Eagle was very happy to see him. She missed him very much. She remembered that how much she missed her people and so she wanted to return to the Indian camp.