Aladdin and the Magic Lamp

This is the short story of Aladdin and the Magic Lamp. Once upon a time, a boy named Aladdin lived far, far away in the east. He lived with his mother and supported her by selling fruits in the market. One day the palace magician came to the market looking for him. “Come with me Aladdin, I have something to show you”, he said. He went with him. The magician led him deep into the desert. They reached the mouth of an immense cave, blocked by a massive rock. The magician stopped and began to say a spell. “Sala, Sala! Paprika! Alabra!”, the magician said by which the massive rock removed automatically.

Aladdin was so shocked. “Go into the cave and bring me golden lamp you will find there. Touch nothing but the lamp!”, the magician said. He was frightened because the passage into the cave was dark. The magician saw his hesitation and handed him a ring with a big gemstone. “Take this ring, it will protect you if anything goes wrong”, the magician said. He went inside. The cave overflowed with glittering gems and gold coins. Beneath a tree laden with treasures stood and an old lamp. “This must be it! But why would he want something so old and worthless? I should take one for my mother as well,” he wondered. 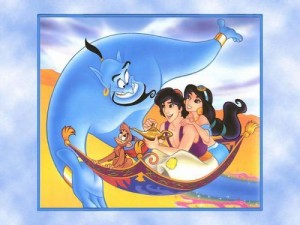 Aladdin And The Magic Lamp – www.bedtimeshortstories.com

The moment Aladdin snatched the treasure, the whole cave began to shake with a thunderous booming sound. He took the magic lamp and ran towards the mouth of the cave. He asked the magician for help but he just wanted the lamp and told him to throw it. The way for entry and exit was now closed. He was left all alone in the dark, terrified. “It’s so dark and cold here! I want to go home to my mother”, he cried. He rubbed the gemstone on the ring that the magician gave him and suddenly it began to glow until it’s light filled the cave. The bright light was gone away and carried him home. Stunned, as he looked at the ring and saw that the gemstone had vanished.

Aladdin told his mother all about his adventure in the cave and about the magician and his ring. “Mom, take a look at the magical lamp”, he said. His mom rubbed it and suddenly, something incredible happened. A genie appeared and asked him for a wish. He was frightened but was excited that the genie could grant him a wish. He commanded him to get some delicious food as same as the palace. Within moments, a table loaded with tasty dishes appeared before him.

The genie’s magic made Aladdin very wealthy. One day, he came to the Sultan with magnificent gifts and treasures. “Your majesty, I have come to ask for your daughter’s hand in marriage”, he said. The Sultan was very pleased, but the princess was unimpressed by his treasures. He was disappointed and did not want to give up on the beautiful princess. He asked the genie to help him and then the genie created a magic carpet. The magician, who was watching him from across the room realized that he had the magic lamp. Turning to the Sultan, he told him to order Aladdin to raise a new palace as he took the princess on the ride through the sky on his magic carpet, and they had a wonderful time. Touched by his kindness and the beauty that he showed her, the princess decided to open her heart to him.

As soon as he returned from his magic carpet ride with the princess, the Sultan ordered him to build a palace. Aladdin rubbed the magic lamp and asked the genie if he could build a palace for him. Genie agreed and in some minutes he made a beautiful palace for his master. Aladdin was now able to marry the princess. However, the magician was still unhappy. He felt that the magic lamp should have been his and that Aladdin had stolen it from him.

One day, the magician came to visit Aladdin’s palace when Aladdin himself was out hunting. He disguised himself as a merchant and wound a turban around his head. “I buy old lamps! I can exchange an old lamp with the new one”, the magician said. The princess exchanged the magic lamp with the new one. The magician’s evil plan worked perfectly. Now that he had the lamp, he wanted to use it to take the princess and Aladdin’s palace for himself. He commanded genie to take Aladdin’s palace and move it to a far-off desert along with the princess. When Aladdin returned home, he was shocked to see that everything has vanished. His mother had just come back from the market and was too confused and amazed.

Aladdin searched far and wide for the princess. Finally, he heard that the magician was now living in the desert in his palace with the princess. The princess hugged Aladdin when he saw him and told him everything. Aladdin and the princess secretly slipped a sleeping pill into the magician’s wine. As soon as the magician drifted off to sleep, Aladdin snatched the magic lamp from his belt and rubbed it. He ordered the genie to move the palace back to where it was and leave the magician alone in the desert.

One day, Aladdin brought the magic lamp to the sea-shore and rubbed it. The genie asked Aladdin about his wish. Aladdin said,”You have granted so many of my wishes. I want to repay you by letting you free.” “Of all my many, many masters, not one has ever wished something for me! You are so kind!”, genie cried. The genie got free and Aladdin tossed the empty magic lamp into the sea and lived out his days in happiness and love, without envy or greed. Finally, there was a Happy Ending to the story of Aladdin and the Magic Lamp.

Here is a short visual depiction of one of the most famous short stories for kids – “Aladdin and the Magic Lamp“. See the video story below,