This is Ali Baba and the Forty Thieves story. In Persia, there lived two brothers. They were Kassim and Ali Baba. One day, after their father died, Kassim, the older brother said, “It’s not your home anymore. Go away and don’t come back.” Ali Baba left his house. He went up to the mountain and saw forty thieves. In front of the big rock, they said, “OPEN SESAME!” With the magic words, the big rock opened, and all the forty thieves went inside. “What a sight,” thought Ali Baba.

After all the thieves left, Ali Baba came closer and he said, “OPEN SESAME!” The door on the rock opened and Ali Baba went in. The cave was full of treasures. “Amazing!” shouted Ali Baba. He took some of the treasures home. He became rich. 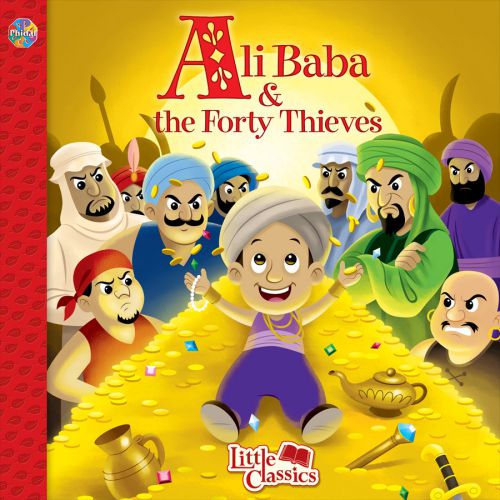 Soon, Ali Baba’s brother Kassim heard about it. He was very jealous. Kassim visited Ali Baba and said, “Where did you get all these things?” Kassim kept asking and asking. Finally, Ali Baba told Kassim about the secret place. Kassim could not wait. He ran to the cave and he shouted, “OPEN SESAME!” Soon, the door opened. He was very excited and he filled up his sack with all the treasures.

However, when he was ready to go out, he found the door was closed. He cried and tried to think of the secret words. He said, “OPEN DONKEY! OPEN MONKEY!” He tried and tried. But, it didn’t work, not at all. Soon, the thieves came back, and Kassim was killed by the angry thieves.

Ali Baba heard about his brother. He went to the cave, took his brother, and he buried him in a nice place. The thieves were angrier than before. They said, “Someone was here, and he took the man. Let’s go to the town and find him.” Soon, they knew it was Ali Baba.

Finally, one of the thieves saw Ali Baba. He put a mark on Ali Baba’s door. However, Ali Baba’s maid saw it. She put the same mark on all the doors in town.

The next day, the thieves came to get Ali Baba. However, all the doors had the same marks, and they could not find Ali Baba’s house. In the end, the thieves found Ali Baba’s house and they went in. They hid in the big jars. But again, the maid saw them hiding. She poured boiling oil into the jars. The thieves in the jars screamed, and then they all died.

One last thief was the chief. He went to Ali Baba’s house as a guest. But, Ali Baba’s maid knew who he was. “Be my guest! Relax and enjoy the show!” said the maid. She brought two swords, and she started to dance. As she moved, she came closer to the thief. Then, she stabbed him quickly. Later, Ali Baba learned what happened. He was surprised by her help and wisdom. “Thank you for saving my life,” he said. Ali Baba married his maid and they lived happily ever after.

Here is a short visual depiction of “Ali Baba and the Forty Thieves Story“. See the video story below,