This is the Alice in Wonderland short story. Alice is sitting on a bench with her sister, and she is really rather bored. Suddenly, a white rabbit passes by, checking his watch and lamenting that he is going to be late.

Alice follows the rabbit down the hole where she finds a bottle with a note saying “drink me.” Curious Alice drinks and finds herself shrinking. She now fits through a small door in the room. Behind the door, there is a lovely garden and Alice decides to go for a walk. You may also like to read, Frozen Elsa Story. 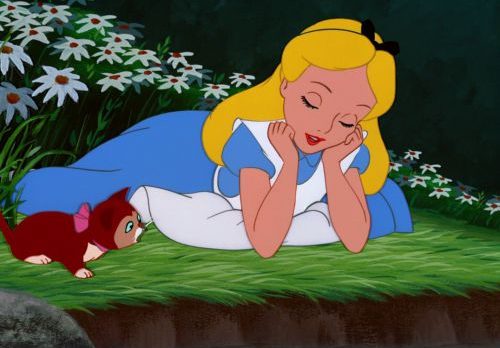 In the garden, she meets a caterpillar who is sitting on a large mushroom, smoking a water pipe. When Alice inhales the smoke from the caterpillar, she begins to see the whole world shifting into strange shapes and colors. Luckily, it doesn’t last for long and Alice continues following the rabbit.

She finds herself at a tea party with the March Hare, the Mad Hatter, and the rabbit. They are having a fight with time, which is why it is always 6 O ‘ clock in the afternoon there.

Alice walks on further still and meets three gardeners who look like playing cards. They are painting roses red because they accidentally planted white roses. Also, read The Little Mermaid.

The Queen of hearts comes into the garden with her guests and the white rabbit is there too. They are going to play croquet, with hedgehogs for balls, flamingos for mallets, and soldiers for hoops.

When they are back in the castle, they realize someone has stolen the Queen’s tarts! The queen is very angry and thinks that Alice has done it. Alice starts growing again, which makes the Queen certain that she is the culprit. All the Queen’s subject thinks Alice is guilty too and they almost throw her into prison.

At that moment, Alice wakes up on the bench next to her sister and it seems that it all was a dream! Also, read Beauty And The Beast.

Here is a short visual depiction of “Alice in Wonderland short story“. See the video story below,