This is an inspirational story of helping others. Peter and Handy were twin brothers. Though the looked the same their hearts and minds were completely opposite. Peter lived to enjoy his life. He never cared for people around him. All he concerned about was his happiness. On the other hand, Handy liked helping people. He was good at heart. He liked taking care of his grandparents, doing chores for his mom and dad.

On the other hand, Handy liked helping people. He was good at heart. He liked taking care of his grandparents, doing chores for his mom and dad and even helped Peter complete his homework. His friends and teachers appreciated him as he was always ready to lend a hand. Also, read Self Help Is The Best Help. 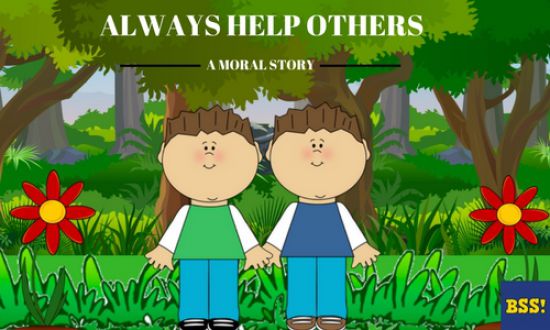 Story of helping others

It was summer vacation. Peter and Handy decided to go on trekking with their friends. The first day of the trek was good and the brothers enjoyed a lot. Unfortunately, the brothers lost their way during the second day of the trek. Peter started walking deep into the forest while Handy was following him.

After a while, the brothers lost track of each other as well. On the way, Peter met an old man who begged him for food. Peter simply refused to give his share to him. Next, he met a little girl who had hurt her leg. She asked him to help her get back to her village nearby. Again, Peter refused to offer any kind of help and carried on his way.

Though Handy couldn’t see Peter, he was actually just a few yards behind him. When he met the old man, he offered him all the food he had and went his way. Soon, he came across the little girl as well. He helped her stand up, offered her some water and even helped her get back to her village.

It was evening by the time. Handy decided to start again. The little girl’s parents advised him to spend the night with them. “We’ll go with you to help you find your brother and friends,” they assured. Handy agreed. On the other hand, the darkness and the voices in the jungle started scaring Peter. He wished someone was there to help him. But there was no one in sight except dark reflections in the jungle. He was feeling cold and lonely.

Suddenly, Peter came across the same old man again. He ran to him and begged him for help. “Help me! I’m lost! Have you seen my brother? He looks just like me.” The old man looked at Peter and said, “Surely I’ve seen that gem of a child. But, why should I help you? You refused to help me when I was in need. Now go away from here!” Disheartened Peter left the place.

Soon, he saw lights down the hill. It looked like a village. Peter started running towards it and fell down. He hurt his leg badly but still managed to get to the village. At the entrance of the village, he met the same girl he had refused to help. He asked him to find shelter for the night, but the girl replied, “Spend the night under the tree. You deserve it!” Peter sat down under a tree and started crying. He had realized the importance of helping people.He spent the night in pain.

At dawn, he heard a voice calling his name. It was Handy and the little village girl. Peter rushed to him and said, “Thank god, I’ve found you! Now I realize how important it is to help others.” Peter and Handy looked and behaved the same since that day.

Here is a visual depiction of this inspirational story of helping others, “Always Help Others”. See the video story below,

Story Of Helping Others Video