Anansi The Spider And The Sky Kingdom

This is one of the best stories of Anansi the Spider for kids. The world is dark without light. The animals couldn’t follow or even see their children. King Lion called to the animals and said, “Who will go to the King of the sky and ask for a light.” The eagle screamed, “Weee! I can fly the highest.” Off he went into the clouds but eagle could not fly high enough.

The monkey chattered, “I can climb into the sky!” Off he went to the trees, but the monkey could not climb high enough. “Me!” called the elephant. “Me!” called all the big animals, but all of them failed. Finally, Anansi, the spider came forward and said, “I can spin away up into the sky.” King Lion laughed at him and said, “You are too little!” “I may be tiny,” Anansi replied, “but my friends and I can do anything if we work together!” All the animals laughed but King Lion roared, “Get off! We shall see what Anansi and his friends can do!” 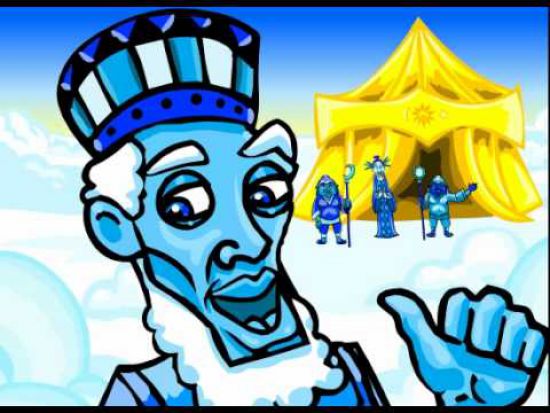 Anansi called out, “Ant and fly, let’s go!”, he began to weave a web from the Earth. It stretched high into the clouds and Anansi and his friends climbed up towards the sky Kingdom. After climbing a lot, they finally reached the last cloud. It was surrounded by bright light and beautiful colors. You may also like to read, Rainbow Serpent Story.

Suddenly, the King of the sky stood in front of them. “What do you want here?” the King asked. “We have come for light, King! Will you please share it with the Earth below!” The King agreed but he wanted to see how worthy Anansi was. The King had given three tests. The first test was to cut down every blade of grass in the huge field before sunrise tomorrow. Anansi thought for a while and ordered his friend ant to tell his family so that it could be chopped overnight. Together, all the ants cut down the grass blades and the first task was completed.

The second condition was to eat all the fruits from a huge field. Anansi thought for a while and commanded the fly, “Go to the Earth and tell all the fly family to eat the fruits as fast as they could!” When the King of the sky saw the fruits the next morning, it was all vanished. The King of the sky was now very furious and decided to give the toughest task.

The King of the sky went to his tent and decided to offer two boxes. One of them was a tiny silver box and the other one was a very big box of gold. The fly, as always overheard the King and told Anansi to choose the tiny silver box. Anansi, as decided chose the box and the King of sky sent them back to the Earth. Also, read Princess Tiana Story.

When they reached back, the presented the tiny silver box to the King of the jungle. As they opened the box, a rooster appeared. When she said, “Cock-A-Doodle-Doo!” the sun appeared. From then on, the Earth never faced the darkness without light. Every morning before anyone gets up, the rooster says, “Cock-A-Doodle-Doo!”

Here is a short visual depiction of one of the best stories of Anansi the Spider,  “Anansi And The Sky Kingdom“. See the story video below: