Androcles And The Lion

This is Androcles and the Lion Story for kids to read. In ancient Rome, many, many years ago, a slave named Androcles ran away from his master. The slave ran fast and quick and made it to the nearby woods. There, he took shelter beside a tree. The poor man was tired to the bone and sweating excessively. “I must rest,” he huffed and slumped to the ground.

Suddenly, the man heard a lion roaring. The man decided to change his spot after some rest. He could hear the groaning and moaning of the lion. And once in a while, the lion would let out a loud roar. “I must leave now,” the man thought. But the moment he rose to his feet, he found that the lion was coming his way. Also, read The Lion And The Boar. 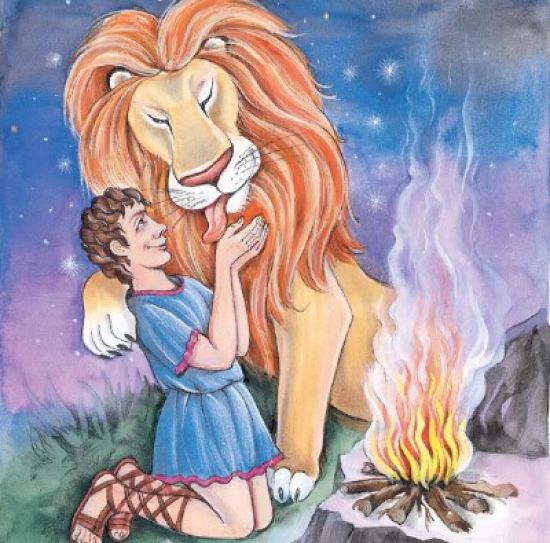 androcles and the lion

Image Source–> www.howstuffworks.com. The slave froze in his spot. He observed that the lion’s right paw was bloodied. The poor lion licked his wound but no progress was made. The lion moaned in pain. Then, suddenly the lion stretched his paw out to the slave. “It’s a thorn,” observed the slave, “must be painful!”

Mustering up all the courage the slave could find, he swiftly plucked out the thorn. The lion moaned in relief and then the lion jumped up to the man and rubbed his head against him. After that, the lion left the slave alone. The man could not stay hidden for long. The king’s soldiers soon found him out and took him, prisoner. “You’ll be thrown to the lions in the arena,” the guards told him. “Well, that’s what you get for running away,” the snorted.

In ancient Roman times, it was customary to throw all sorts of criminals to the lions as punishment. The same fate awaited the slave who had run away from his master. “I can’t run away anymore,” the slave whispered softly.

Soon, the day of his execution came and the slave was thrown into the arena. The poor man was scared, “I am surely going to die today!” he cried out. Soon, the massive gates were lifted and a way for the lion to come out was made. The lion’s grunts and roars sent chills down the man’s spine. A lion stepped into the arena and roared once more.

To everyone’s surprise, the lion did not jump up to kill the man. Instead, the lion ran to the slave and jumped up to him and rubbed his face against him.  While everyone was in great shock, the man realized it was the same lion he had helped in the jungle due to his healthy behavior. Soon after this incident, the king asked to see the slave. The king demanded an explanation out the slave because of this incident.

The frightened slave finally narrated the entire story of the lion and the thorn. “I see,” the king said thoughtfully after he heard the story. “So, the lion remembered that you had helped him. Even untamed beasts know the meaning of gratitude,” the king spoke in surprise.

As a result, the man was let go as a free man and all his crimes were forgiven. As for the lion, the king ordered him to be set free in the jungle. You may also like to read, The Milkmaid And Her Pail.

Here is a visual depiction of, “Androcles And The Lion Story”. See the video story below,

Androcles And The Lion Story Video