This is the April Fools Day Story For Kids. There are so many different stories about how 1st April came to be celebrated as April Fool’s Day. But the most widespread one is on the calendar. Long, long time ago, in the year 1582, Pope Gregory the XIII introduced a new calendar, the Gregorian calendar. This calendar started the New Year on the 1st of January.

But back then, information took a time to spread as there was no phone or the internet back then. So for a long time, many people did not know about the change in the calendar. And those who knew about it refused to accept the new calendar. These people continued to celebrate the New Year’s Day on 1st of April. Also, read The Foolish Disciples. 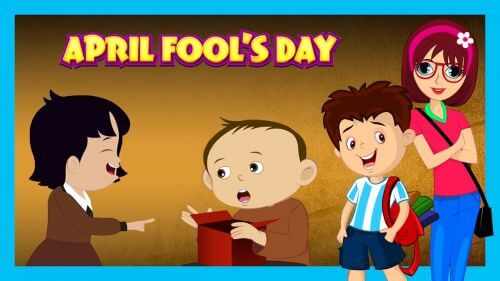 Eventually, the new calendar was accepted worldwide but the pranks stayed on. Friends, siblings, relatives, and even parents often play their tricks on their loved ones on 1st of April. All the pranks are just for harmless fun and never to hurt anyone. They usually end up with the pranksters shouting out “April Fool!” and peels of laughter from everywhere. You may also like to read, The Wise Men Of Gotham.

Here is a visual depiction of the “April Fools Day Story“. See the video story below,