This is one of the most famous Ariel Mermaid Bedtime Story for kids. Ariel and Flounder love to play hide-and-seek under the sea. They want the baby seal to play with them. Ariel points to where the seal could be. The two friends swim to find him. And so, they find the seal! He is sitting on a rock. He cannot wait to play hide-and-seek. Also read, The Little Mermaid by Hans Christian Andersen.

“One, two, three….,” Ariel starts to count. The others hide. “Ready or not, here I come!” she says. Ariel looks in the seaweed. She searches for the sea plants. “Gotcha!” cries, Ariel. She has found Flounder. Now, Ariel has to find the baby seal. Where it can be? 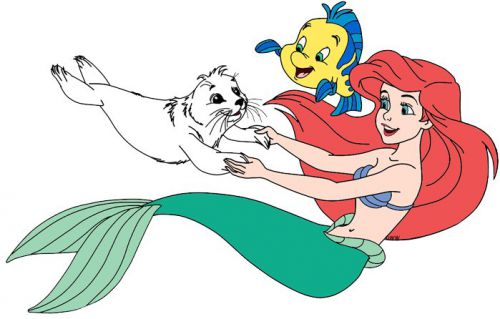 Squeak! Squeak! “What is that noise?” asks Ariel. They swim to find out. The baby seal was struck and his tail was caught in a giant clamshell. Ariel tries to open the shell. She lifts it and she pulls it! She does it! Ariel sets the seal free. Ariel is happy she has found the seal.

The seal is very happy to be found. Ariel gives her friend a big hug. She seals it with a kiss! More stories of Ariel Mermaid.

Here is a short visual depiction of, “Ariel Mermaid Bedtime Story“. See the video story below,