This is one of the great Mermaid Short Stories for kids to read. Oh Eric, this is wonderful. I can dance with you and see the ocean, Ariel said excitedly as she twirled around the ballroom with the prince. Eric wanted to know if she misses her sea friends. “Sometimes! But I love being with you!” Ariel replied a bit sadly. Eric knew Ariel wished she could see her friends more. But he also knew that the rough water at the beach could be dangerous for them. That gave him an idea. Also read, The Little Mermaid- By Hans Christian Andersen.

A few days later, he brought Ariel to the lagoon. It now had a big wall to keep out dangerous sea creatures like sharks, but it also had a gate so that Ariel’s friend could enter the lagoon. In fact, Flounder, Scuttle and Sebastian were there to greet her. Oh Eric, I love it, Ariel gasped. Image Source @www.fenixfairy.deviantart.com Ariel was so excited that she waded into the water. Then she stopped, seeing something else in the lagoon. As they watched, a baby dolphin leaped out of the water, He’s just a baby, I wonder where his mother is? said Ariel. Flounder swam across the lagoon, but the baby dolphin raced away. Poor little guy. He seems scared of me, Flounder said.

We should find her mother right away. I’ll bet she’s on the other side of the wall, Ariel said as she gently coaxed the baby to swim over to her. Don’t worry, Ariel. We’ll find her, flounder said. But Sebastian and flounder couldn’t find the dolphin’s mother. Oh Ariel, this is terrible. We’ve looked everywhere under the sea but we can’t find her. King Triton will be so angry, said Sebastian a few days later. Ariel was watching the little dolphin swimming slowly around the lagoon. She knew that the confused baby was looking for his mother. 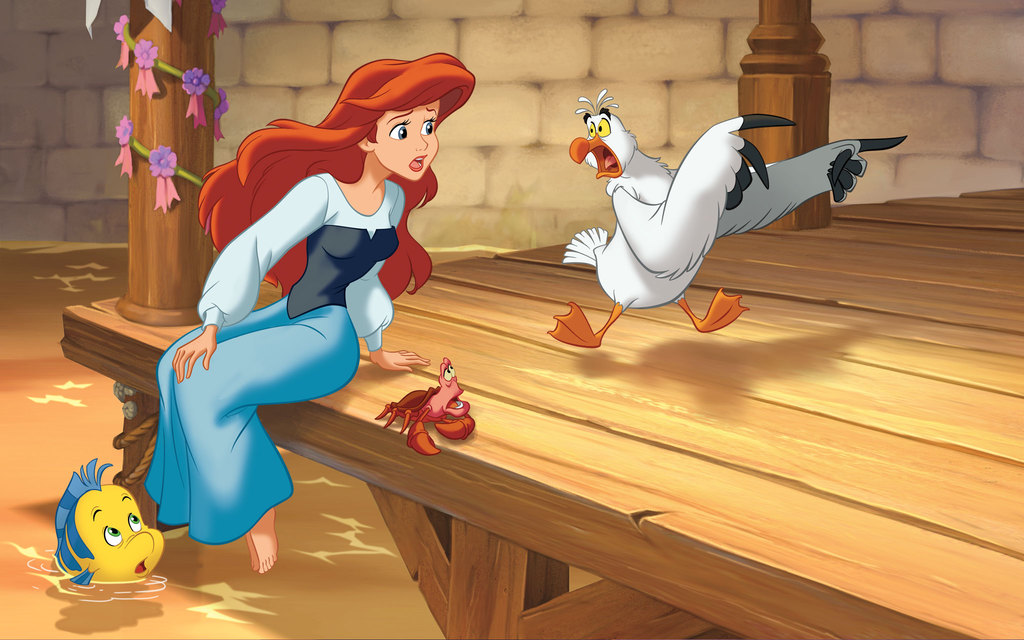 Image Source @www.kidsultimatezone.blogspot.in. Later that night, Ariel awoke to a loud clap of thunder. From the safety of the palace, she saw terrible waves crashing to the shore. Ariel, are you worried about the baby dolphin?, Eric asked. Oh Eric, I am. He must be terrified. We need to go to him and I need to ask my father for help, replied Ariel. Eric felt terrible. He now understood that he had made a bad decision by closing in the lagoon.

He followed Ariel into the stormy night, ready to help in any way he could. When they arrived at the lagoon, Flounder was trying to calm the frightened baby dolphin. Go to him Eric. He feels safe with you, Ariel said gently. And looked into her prince’s eyes, letting him know that she trusted him with her sea friends.

Ariel carefully climbed onto the wall of the lagoon and called to all the sea creatures. “Help me, please! I’m Ariel, princess of the seas. I need my father, King Triton, Please help” Ariel cried. below the surface, sea creatures raced to find King Triton.

Eric tried to keep the baby dolphin safe from the crashing waves. Holding him, Eric led him to the calmer waters near some rocks. Suddenly, there was a flash of light and the storm calmed. King Triton had arrived at the lagoon. “What has happened here?” King Triton roared. Eric looked down humbly and said, “It is entirely my fault, Sir. I built this wall to make a nice place for Ariel to visit her friends. I was wrong,” Eric explained.

The King of the seas glared at Eric. Then with a hint of a smile he added, “Well, you’re a human after all.” With a wave of his trident, King Triton called to all the dolphins and they quickly found the baby dolphin’s mother. Frantically, she tried to get into the lagoon. “Oh dear, the gate won’t open. She can’t get in”, Ariel exclaimed. Eric looked at King Triton. The King of the seas raised his trident and blasted down the wall. That night, Ariel and Eric returned to the lagoon. It was filled with sea creatures. “I love this place. Thank you”, Ariel said to her husband. Just then, the baby dolphin and his mother entered the lagoon, surfaced, and playfully splashed the prince and princess. “I think that means we are forgiven”, Ariel laughed. More stories of Ariel- The Mermaid.

Here is a visual depiction of one of the awesome mermaid short stories, Ariel’s Dolphin Adventure Story. See the video story below,