The Bat, The Bird And The Beast Story

This is one of the best aesop’s fables to read for kids. Long, long ago, a battle broke out between the beasts of the ground and the birds in the sky. A coward bat watched the fight to see which side would win. As soon as he saw the beast winning, he decided to hide his wings and find king Lion. “Your majesty, since I resemble a land creature like a mouse, I would like to be a part of your team.” said the bat. The lion roared and said, “Wow! Yes, I can see that. From now on bat, you are one of us! Ha! Ha! Ha!”. Read more such awesome aesop fables.

Before long, the birds of the sky began to gain control. Now, the worried bat decided he needed to visit with the king of the birds, the eagle. “Your majesty, I too have wings of a bird. Please let me join you!” the bat said. The eagle king replied, “All right bat! From now on, you are a bird!” The fight between the beasts and the birds endlessly continued. And the cowardice bat continued to go back and forth changing his position. Also read, The Eagle And The Arrow. 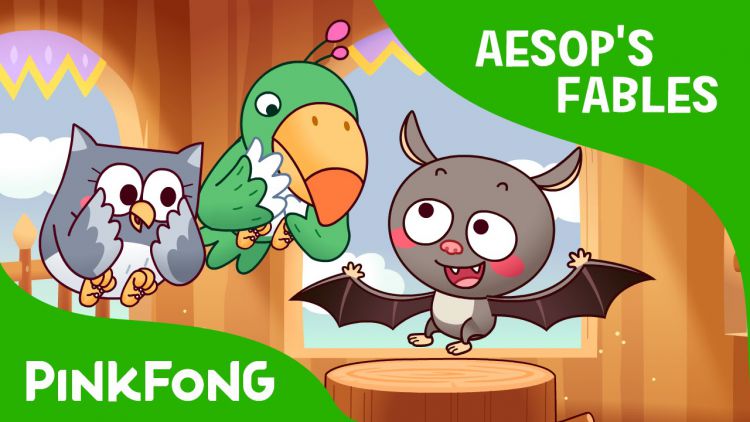 One day, the battles were finally over and there was peace in the forest. King Lion went to king Eagle and said, “King Eagle, from now on, the beasts and the birds are one!” Everybody agreed and shouted with joy happily. “We are now one family,” everybody said.

The cowardice bat, however, wasn’t welcomed by either side. “We don’t want anything to do with your kind! Leave the forest!” said king Lion angrily. After the bat was shunned by the king, he had no choice, but to fly off to a dark and lonely cave. Finally, everyone stayed together happily. You may also like, The Tortoise And The Eagle.

Here is a visual depiction of one of the best aesop’s fables for kids, “The Bat, The Bird and The Beast Story”. See the video story below,