This is one of the best Grimm fairytales to read for kids. Once, there lives a young man in a village. He is sad. He has no family, no brothers or sisters, and no money. Suddenly, an old man in a green coat comes to him. He says, “I will give you this coat. Its pocket will always be full of money!” The young man is stunned and curiously wears the green coat.

The old man says, “But your name will be Bearskin! You cannot wash your hair, cut your hair, or cut your nails.” The old man gives him a bearskin. “And you must sleep in this bearskin. But after seven years, you will be free and rich!” he added. The young man says, “I will do it!” Also, read King Thrushbeard. 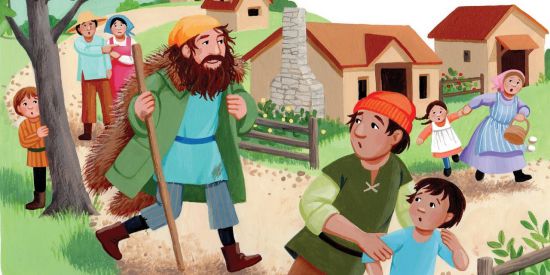 Image Source–> www.youtube.com. Every day, Bearskin looks more like a bear. He is dirty. His hair is long, and his nails are long. Many people do not like him. Bearskin continues to live like this till four years. Then, one day, four years later, Bearskin hears an old man crying under the tree. He has no money to buy food for his family. So, he gives a poor man some gold. The poor man is very happy and says, “You can marry one of my three daughters!” He takes Bearskin to his house.

Two daughters run away just after seeing the Bearskin and hide behind the door. They think Bearskin is a bear. But, the youngest daughter wants to marry him. Bearskin gives her half a ring as a token of promise. “I will be back in three years!” he says.

Three years later, Bearskin meets the poor man again. The poor man washes Bearskin and cuts his hair, beard, and nails. Bearskin buys some good clothes and goes back to the poor man’s house. All the sisters want to marry him because now he is rich and handsome.

Bearskin had given half a ring to the youngest daughter. “I like you as a bear, and I like you as a man! You are a good man. Yes, I will marry you,” she says. Both the sisters are now jealous of their younger sister. She marries Bearskin and lives happily ever after. You may also like to read, Tom Thumb Short Story.

Here is a visual depiction of, “Bearskin Grimm Fairytales”. See the video story below,