This is one of the great inspirational kids stories which has been adapted from Zen stories. Once upon a time, long ago, there was a famous Zen Temple. In that temple, there was a beautiful garden with all kinds of trees, shrubs and plants.

One of the priests in that temple had an interest in gardening. So, that priest was selected to take care of the garden in the temple by the others. The priest was overjoyed with this decision and worked hard to make the garden beautiful. You may also like to read, Zen Master Asks, “Why Ride The Bicycle?”. 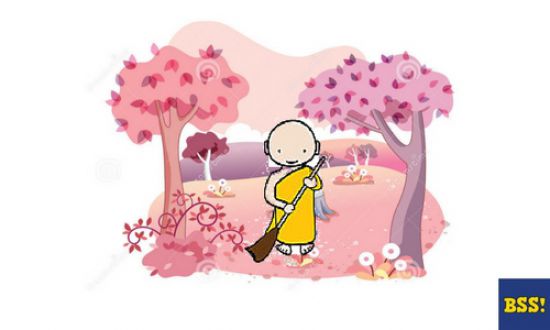 Every day, without fail the priest would go to the garden. He raked the soil and took care of the garden. Besides the temple, there was a much smaller temple. And there lived an old Zen monk. Whenever the priest came to tend to the garden, the old monk observed the priest.

He took, even more, care when he was raking the autumn leaves. The priest made a neat heap of the leaves. Now the garden looked perfect. Not a thing out of place. When he was done, he admired his hard work. He then called out to the old monk, “Doesn’t this look beautiful?”

“Yes, it is beautiful,” agreed the old monk. “But there is one thing that you missed out. I’ll set it right for you.” The old monk walked across the garden to the tree and gave the trunk a mighty shake. Many leaves fell down. “Now it looks beautiful,” announced the old monk.Also, read Beauty Is In Deeds.

That’s when the priest realized that a little imperfection is required in things to make them look beautiful. A total perfection is mechanical and unnatural. He remembered his lesson for the rest of his life.

MORAL OF THE STORY: IMPERFECTION MAKES US BEAUTIFUL AND MORE HUMAN.