Beauty Is In Deeds

This is one of the amazing English moral stories. Once, there was a magnificent antelope who had majestic mani fangled antlers. He was robust in health and his coat gleamed like a metal. He was duly proud of his beauty. Whenever he went to the lake to drink water, he could not resist gazing at his reflection in the water. Read more English moral stories here.

One day, he was drinking water and admiring the reflection of his own beauty. A frog happened to be nearby watching him. “Wonderful, Antelope Sir! What a body!” he croaked. “That’s right, frog! God has been kind enough to me with such glorious body. What lovely shine my coat has!” the deer said proudly. “Very true! And a broad forehead, lovely eyes, and pretty ears. You are a picture, sir,” the frog croaked. The antelope nodded his head. 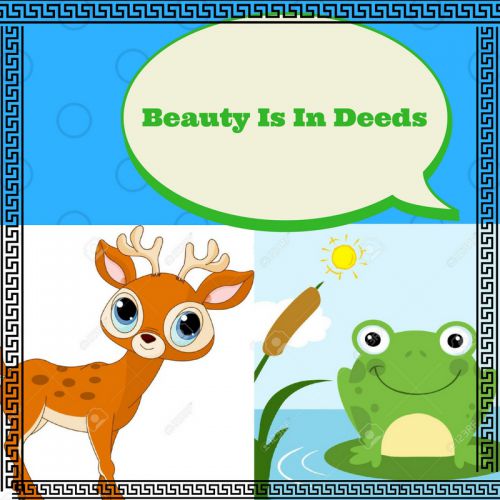 “Look at those impressive antlers! How their magnificent branches weave a crown on my head like that of a monarch?” the antelope said admiring himself. “And they look pretty sharp as well,” the frog spoke in great admiration. “Dear frog, these antlers are the envy of all the other creatures!” the deer said.

“But, deer sir, your legs don’t compliment your beautiful body,” the frog said blinking his eyes. The antelope looked down at his legs. They looked like dry sticks of wood. Suddenly, sadness descended in his heart. The frog croaked, “What a pity! Such fine physique and so twiggy limbs with hooves. It perhaps God’s own brand of jokes.” The antelope shook his head sadly. He moaned, “You are right froggy! Has god played a cruel joke on me! A picture of tragedy I am.”

The frog jumped into the water. He had no intention of sitting in mourning with the antelope. For some time the antelope stood cursing his luck. Then, he heard the barking sounds of a pack of hunting dogs. A panic struck the antelope. The dogs were coming in his direction. He ran for his life and the same ugly legs carried him away to safety from the reach of the murderous dogs. He heaved a sigh of relief. His legs were not that ugly, he revised his opinion. Now, he admired the strength and reach of his efficient legs.

He ran for his life and the same ugly legs carried him away to safety from the reach of the murderous dogs. He heaved a sigh of relief. His legs were not that ugly, he revised his opinion. Now, he admired the strength and reach of his efficient legs. Also read, The Deer Who Played Truant!

Suddenly, he heard the barking of the dogs again. The antelope ran again towards the bushes to get out of the sight of the approaching dogs. But Alas! His mani fangled antlers got caught in the bushes. He tried to break free but more he tried, the more badly his antlers got entangled into the bush, the very antlers he always prided over were now working for his death. What an irony!

The dogs appeared on the scene and they pounced upon the helpless antelope with sharp canines. In short time, they tore the antelope to pieces. Before dying, the antelope realized that the real beauty lay in the usefulness of an object and not in the outer appearance.

MORAL: THE REAL BEAUTY LIES IN THE DEEDS AND NOT IN THE VISUAL IMPRESSIONS.