Beaver And The Wolf – A Story With Morals

This is an amazing bedtime story with morals for kids online. Once upon a time, there was a beaver living in the forest named Furry. He had lots of friends and liked to play outside.

One day a big wolf came and started saying, “This is my forest and I am bigger and stronger than you. So you will have to move out of the forest by tomorrow or I will destroy your house.” Also, read Top 10 Moral Stories For Kids With Good Moral Values. 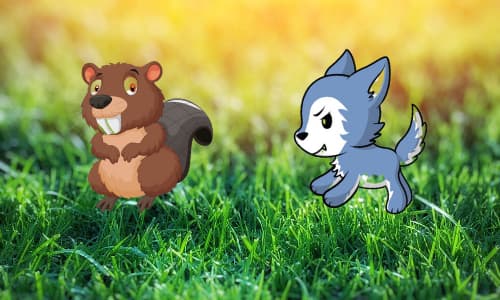 Image Source@Pinterest. Later that night Furry and his friends were thinking what to do. Furry suggested that they should build a trap to catch the wolf and teach him a lesson that there is somebody stronger than him. The beavers decided it would be a deep hole covered with sticks on it.

One of the beavers exclaimed, “How are we going to do that?” Furry suggested that they could ask the rabbits for help to build the trap. About one hour later the beavers went to the rabbits’ burrow and explained what was going to happen tomorrow in the morning. Also, read Top 5 Moral Bedtime Stories For Boys

The rabbits agreed to help. It took them the entire night but they finished it by the morning. In the morning they all hid up in the trees. The wolf came and barked at them to pack their bags and leave the forest immediately. Since the wolf wasn’t looking where he was going he fell into the trap.

All the animals came and saw that the wolf was trapped in the hole. The wolf kept asking so they could let him out of the hole but Furry said, “We would’ve but since you have been so mean to us we will not let you out of the hole.” Then the wolf promised that he will never tell them to move out of the forest and be mean to them.

Furry and his friends forgave the wolf and they got a big stick and dropped it down the hole so that the wolf could climb out. You may also like to read, The Thirsty Crow.

MORAL OF THE STORY:  DON’T BE MEAN TO OTHERS OR YOU WILL GET IT BACK.

This story has been beautifully put together and shared by a young fan of Bedtime Short Stories, Nicolas. Keep reading, Keep sharing!