This is belling the cat story for kids. There was a small village with houses made of mud. Hundreds of mice lived in these houses. These mice jumped about here and there. During the Ganesh festival, people would feed them laddus. The mice used to enjoy the whole day. They didn’t know the meaning of fear. Also, read The Cunning Cat Story.

Once, during these days, a cat came to that area. On seeing so many mice, the cat made her home there. The mice were gentle and the cat was very cunning. When the mice were busy eating something, the cat quietly used to come at the door, catch a mouse in her mouth and run away. She would then eat that mouse. 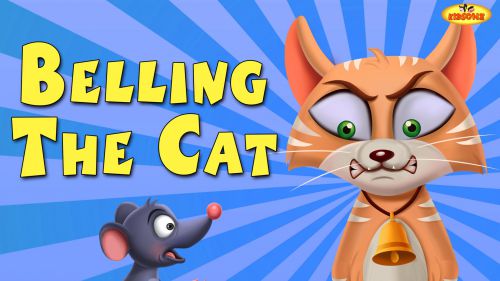 As the days went by, the number of mice were decreasing. The mice were worried and they didn’t know when the cat would bounce on them and from which direction. They just started running on seeing the cat. The cat still managed to catch at least one of them.

The mice then called a meeting to come up with a plan and save themselves from the cat’s terror. All the mice gathered for the meeting and started to look for an idea. One of them suggested to tie anklets on all four feet of the cat. On hearing this, another one said, “The cat walks so softly that even if there will be anklets on all four feet, none of them will make any noise.” You may also like The Lion And The Mouse.

MORAL: TALKING IS EASY BUT ACTING IS NOT.

Here is a short visual depiction of “Belling The Cat“. See the video story below,