This is one of the best Jesus stories to read for kids. One day, about 2,000 years ago, an angel named Gabriel appeared to a young Jewish woman named Mary and told her that she would soon give birth to the savior and he would save their people from their sins. Mary and her husband-to-be, Joseph, lived in a town called Nazareth. They traveled to the city of Bethlehem to register for a census, ordered by the Roman Emperor, Caesar Augustus. It was about 65 miles from Nazareth to Bethlehem and the trip took them several days.

Joseph and Mary reached Bethlehem. Joseph searched for a place to stay but all the inns were already full. They ended up spending the night in the stable, a place where animals were kept. That night Jesus was born. There was no crib, so they laid baby Jesus in a manger, a feeding trough for animals. The manger had fresh hay in it and made a nice bed for the baby. 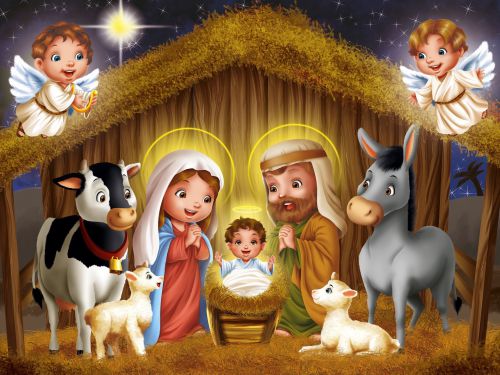 That night, some shepherds were in a field near Bethlehem, keeping watch over their flocks of sheep. An angel appeared to them and told them that the Savior was born. The shepherds hurried to Bethlehem and found Jesus in the manger, just as the angel told them. After they had seen Jesus, they spread the news and everyone who heard was in wonder.

Sometime later, three wise men from eastern countries saw a star in the sky. A very bright star appeared in the sky and it started moving and decided to follow the star. They happened to cross a place called Judea. A man named Herod was the King of Judea. Herod called the wise men to a meeting. He came to know about Jesus and wanted the three wise men to provide information about him. Again, they followed the star. The star was directly above the stable and disappeared. All of them went inside the stable and saw Jesus. They all bowed to the child. They brought Jesus gifts of gold, expensive perfume, and some of the finest things.

That night, while everyone was sleeping, one of the wise men had a dream. He heard a voice saying not to go back to that King. The next day, they took a different route home. King Herod lied when he told the wise men he wanted to worship Jesus. He was afraid and thought he would replace him. He didn’t understand that Jesus would grow up to be God’s king Spiritual Kingdom, not King of Judea. King Herod was waiting for the three wise men. He decided to send his soldiers to Bethlehem and ordered them to kill all the boy children below the age of two.

In Bethlehem, Joseph had a dream. He heard a voice in his dream saying him to flee to Egypt as King Herod was looking out to kill Jesus. The next morning, Joseph took Mary and Jesus to live in Egypt where they would be safe from Herod. Joseph, Mary, and Jesus stayed in Egypt until Herod had died, and then they returned to Nazareth.