The Blind Man And The Lame Man

This is one of the best aesop fable for kids to read. Once upon a time, not that long ago, two men met under certain bad circumstances. One of the men was blind and the other one was lame. That day, the blind man who was walking with the only support of his rugged cane, came to a road. And as he poked around the sturdy ground, the blind man realized it was a bad road, a road he could not tread alone with the only support of his cane. Also, read A Father And His Two Daughters.

Now, he was stuck, he knew not what he was to do anymore. “My, this path will give me a great difficulty. I wish I had a companion to guide me,” the blind man whispered quietly.  However, the blind man decided to walk alone, as there was nothing more he could do. 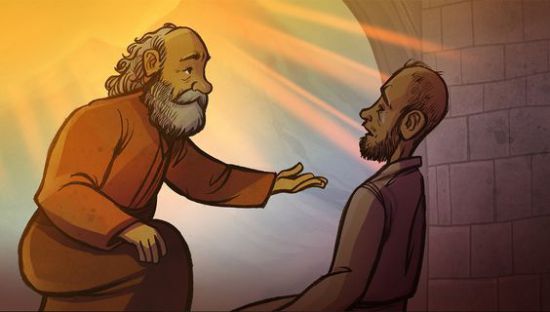 Image Source@ in.pinterest.com. But as he walked, the blind man felt his cane touch something. “Who is it? Is someone nearby?” asked the helpless blind man, for he did not know whether it was a man or something else. “Oh dear friend, it is I,” replied a voice. “Oh. How do you do?” asked the blind man happy to have met someone. He was sure he would find some help now.

“Would you be kind enough to be my guide? I am blind and this road is quite difficult to walk on” the blind man asked hopefully. The blind man heard a desperate sigh from the other party. “I would if I could,” the other man replied. “My friend, I won’t be of any help to you,” the other said, “I can’t even drag myself properly”.

“Oh,” the blind man said, suddenly realizing that the man he met was lame, and could not walk. The blind man became sad and began to walk away. Then suddenly, the lame man calls out to the blind man. “I am willing to help you if you carry me on your back. You look healthy and strong, you can easily carry me. That way, I could easily navigate”.

The blind man agreed and said, “Yes we should help each other out”. And so the blind man carried the lame man who in turn helped the blind man walk safely. Also, read The Moon And Her Mother.

MORAL OF THE STORY: WITH COOPERATION, WE CAN GO A LONG WAY!

Tagged with: aesop fable for kids