This is the scary stories for kids. Long ago, it was well known that a certain hotel’s 13th floor was haunted by a ghost. It was said that it was a deadly ghost. One day, a man walked into the hotel. He asked for a room. The manager apologized and told the man that all the rooms were occupied, except for one. Read more amazing Short Halloween Stories For Kids.

“The room is on the 13th floor sir,” the manager told the man, “But we do not rent that room.” The manager was trembling with fear when he said, “It’s haunted.” “I’ll take it.” the man told the manager. He added that he did not believe in ghosts. So, the manager gave the keys to the man. 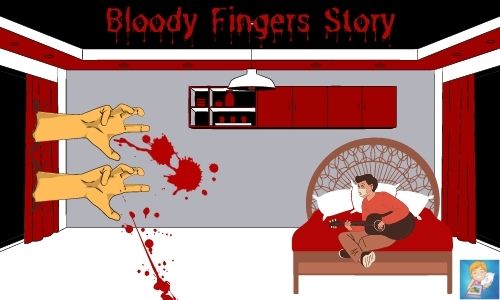 The man took the keys and went upstairs to the room. He decided to get some sleep, as he was very tired. Just when the man was about to turn the lights off, he heard a low scary growl. The door squeaked and opened slowly. A pale, ghostly figure emerged from the closet and staggered forth, its fingers dripping with blood.

“Bloody fingers!” yelled the ghost, “Bloody fingers!” The man got frightened and he ran off. He did not even care to change out of his pajamas. The man took his suitcase and out he ran, never to be seen again.

The next night an old woman entered the hotel. She too asked for a room. The hotel was still full, except for the room on the 13th floor. The manager warned the old lady about the ghost. “Son, I have seen quite a lot in my day,” she told the manager, “I am sure, there is nothing that could bother me.” You may also like, The Witch’s Wall.

She too took the keys and went to the room. And just as she was about to turn off the lights, she heard the door squeak open. A pale figure stood in front of her. The ghost’s fingers were still bleeding. “Bloody fingers. Bloody fingers.” The ghost repeated. The old woman let out a loud shriek and ran away as fast as she could.

A week had passed, when a teenage boy showed up. He arrived late in the evening and was carrying a guitar case along with him. He too asked for a room. Despite the manager’s advice, the boy took the haunted room. He paid for the room and collected his key from the desk. He took his guitar and went upstairs to the haunted room.

The boy decided to sit and play his guitar for a while. While the boy sat, strumming his guitar, the door slowly squeaked open. Again the ghost entered. The ghost was pale and ghastly as ever. Its fingers bleeding all over the floor. “Bloody fingers!” it screamed.

The boy was unaffected. He ignored the ghost and kept strumming his guitar. “BLOODY FINGERS!” scream the ghost again. The boy yet again ignored him.  The ghost moaned and moaned. Finally, the boy stopped playing his guitar and looked straight at the ghost and said, “Shut up and get yourself a Band-Aid.”