This is one of the famous music stories for kids, “The Bremen Town Musicians Story“. Once upon a time, there lived a farmer who had a donkey. This donkey worked for very long years to serve his owner carrying sets of flours and weight. But as the years passed, the donkey got older and lost it’s strength. Understanding that he had lost his ability to work around the farm, one early morning he left the farm and started on a long journey. He thought of go to Bremen and sing for his living. Read more such awesome music stories for kids from here.

Along his way. he came across a hound dog lying on the road. “What are you doing lying like this?” asked the donkey. The dog said, “I lost my speed as I get older! I am unable to even hunt.” He offered him to join him in the band and play the drums. The dog liked the offer, so he joined and went along with the donkey. 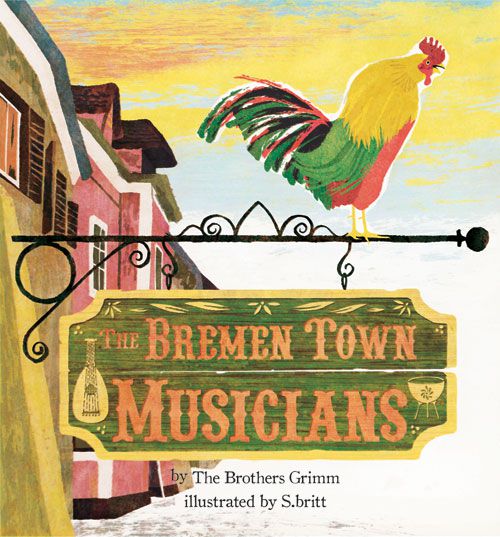 Not longer after, they saw a cat sitting on the roof of a house. The cat looked very sad. The donkey asked, “Why do you look sad?” The cat replied, “I am older now! I don’t have my beautiful sharp teeth. Instead of chasing mice, I sit across the fireplace and get lazy. My master has thrown me out of the house!” The donkey consoled her and told him to join them. The donkey offered her to play harmonica in the band. She agreed and joined the group. Also read, The Pied Piper Of Hamelin.

When they were passing in front of the farm, they saw a rooster croaking on the fence. The donkey asked the rooster why he was croaking. The rooster said, “Today is my last day! My master is going to serve me to the guests tomorrow!” The donkey advised him not to waste his voice like this and invited him to join his band. The rooster liked the offer and went away with them. He jumped off the fence and joined their journey. The four of them hit the road together.

They decided to spend a night in the forest. Before sleeping, the rooster went sneaking around and from the very high point he was on, he saw a lighthouse. All of them got up and started to walk where the light came from. Finally, they arrived the lighthouse. Being the tallest of them all, the donkey approached the window. The donkey peeped inside and saw lots of food and drinks. Everyone started drooling after listening to him. But he told everyone that there were four armed burglars at the table. Hearing the word “burglar” they all were very disappointed.

They made a plan to escape the four burglars. The four friends formed a tower jumping on top of each other. Then, with the donkey’s signal, they all started to sing. When they heard this horrible noise, the burglars jumped in the air with fear. The four friends broke the window and went inside with a big clash!

After the meal, they all looked for a cozy place to have a good night sleep because they were very tired. They turned off all the lights and went to bed. It was past midnight now. The burglars saw that there was no light in the house. They sent one of them to check in the house. The burglar found that it was very quiet and wanted to light up the lamp. As soon as he lit the match, the cat jumped on him and scratched his face with his paws, the dog bit his leg. 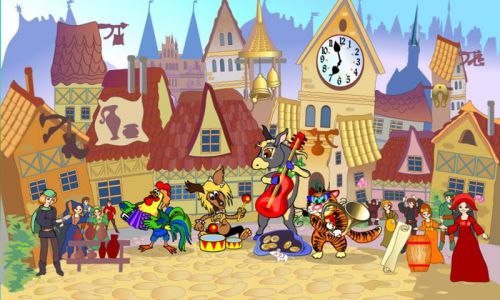 Hearing the noise, the rooster woke up and croak with his lungs out and just when the burglar got the chance to run out from the front door, the donkey gave him a really strong kick with the back of his legs. Abandoned by what just happened, the burglar ran off next to the others. The burglar said, “There were four monsters in that house who attacked me!” All of them ran off without looking at the back and did not show the courage to come back to the house ever again.

The four Bremen musicians really liked this house. So they all gave up to the idea of going to Bremen and decided to move in together into this lovely home where they spent all their day singing and making music.

Here is a visual depiction one of the famous music stories for kids, “The Bremen Town Musicians Story“. See the video story below,