This is one of the best bedtime stories for kids to read. Far below the waves, a little fish named Stanley lived with his school. They were the brightest, sparkliest fish of the deep, dark sea. Also, read The Tale Of Three Fishes.

One morning, Stanley woke up late. “Hellooo! It’s me…e!” he called to his friends. But the reef was strangely quiet. Suddenly, Stanley remembered that today was the day his school swam to cooler waters for the summer. “Jumping jellyfish,” he groaned. He hurried to the meeting point as fast as his fins could carry him. But no one was there. 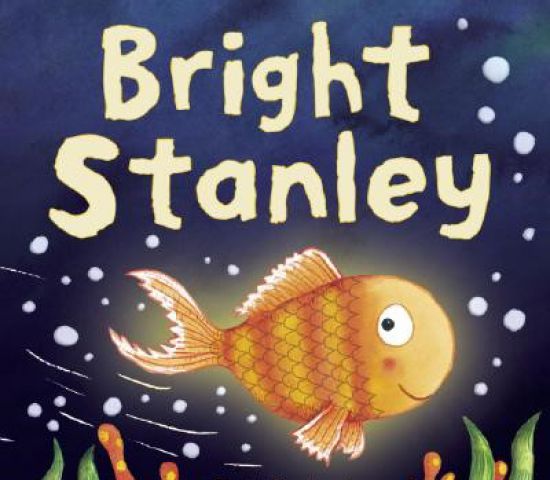 As he looked around, he saw a bright light. “Aha! They haven’t gone far,” he said and he raced towards the glow. But it was only a lobster counting coins. “Go away! Don’t touch my treasure,” the lobster growled, snip-snapping his claws.

“I’m looking for my friends,” said Stanley. “Fish,” the lobster grumbled, “Those others were in such a hurry to find someone that they upset my coins!” “Others?” asked Stanley, “My friends?” “Join them then,” snarled the lobster and Stanley sped off.

Ahead of him, Stanley saw a shimmer. He could just make out a bright, sparkly fish. One of his friends! “Hellooo! It’s me…e!” he called, swimming faster. With a CLONK, Stanley cracked headfirst into something hard. “Jumping jellyfish!” he cried. It wasn’t one of his friends at all, but his own reflection in a shiny pearl. Stanley rubbed his bumped nose, feeling a little dazed. You may also like to read, The Rainbow Fish Story.

He didn’t notice a dark shape coming up behind him.When he turned around, Stanley found himself staring straight into the mouth of a huge SHARK! “Aaaaa!” Stanley shrieked. Over coral and under weeds, he sped with the shark snapping at his tail.

Finally, Stanley saw a small hole in a rock below. He dived down inside to just miss being gobbled up! Deep within the cave, Stanley shivered and shook. He felt sad and lonely. He was beginning to think he’d never see his friends again.

“Well, I can’t stay here forever!” he said at last. Stanley poked his head out of the cave to see if the shark had left. “Jumping jellyfish,” he squealed. The sea was a golden orange, glowing and glittering. It was the most wonderful sight he had ever seen because there, in front of him were his friends! Also, read The Foolish Fish.

“Hellooo! It’s me…e!” he called. “Stanley!” his friends cheered. “Where have you been? We’ve been looking all over for you!” And Stanley told them of his adventures as they swam off in one bright, sparkly happy school.

Here is a short visual depiction of one of the best bedtime stories “Bright Stanley”. See the video story below,