Here is one of the best bible stories for children, “Cain And Abel“. After god had thrown Adam and Eve out of Eden, they started living outside the garden. There they had two sons. They named them Cain and Abel. Abel grew up to be a shepherd who looked after sheep and Cain became the farmer who worked on the land to grow food.

One day, both brothers made an offering to the god. Cain offered his best produce while Abel offered his best sheep. God was more pleased with Abel’s gift and did not even accept Cain’s gift. Cain was very sad and also very angry and jealous of Abel. God warned Cain that there was sin in his heart. Cain did not listen and started planning to kill his brother. Also read –> David And Goliath Story 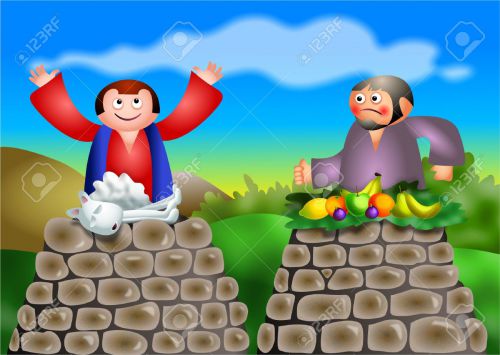 He asked Abel to go for a walk and when they reached a lonely place, he killed Abel. When Cain returned home, his father and mother asked about Abel, but he lied that he did not know about him. But god sensed something was wrong and asked him, “Where is Abel?” He again lied and said he did not know. The god said, “You are lying Cain! You have killed your brother.”

Because of his bad behavior, the god decided not to forgive him and gave him a punishment. The god said, “From this day onwards, you shall be a restless wanderer and no land will give you fruit.” Cain knew if he would leave, his life would be in constant danger and in difficulty. So, he begged God to forgive him and not be so cruel. But God did not relent as he was very angry.

However, God made a special mark on Cain to make sure that no one ever helps him. On that sad, sad day, Cain left his home and family. But worse than that, God would not be with him anymore. That was the hardest. Cain went away and lived in the land of Nod.