This is one of the best short funny stories to read for kids. Once upon a time, there was a clever cook named Gretel. One day Gretel’s master came to the kitchen to let Gretel know a few of his friends would be coming for dinner that evening. He handed her four chickens that he had bought and asked her to cook them for dinner. Gretel prepared the chickens and started to roast them. She enjoyed cooking and everyone in the house loved the meals she made, but that day Gretel was nervous to be cooking for the master’s friends as she wanted the food to be perfect.

As the delicious smell of the roasted chicken hit Gretel’s nose, she thought she should try just one of the wings to check it was cooked properly. Gretel tasted the wing but couldn’t decide if it was ready, so she ate the other wing as well. “They need more time,” she thought. But a few minutes later, worried that the chickens may get burnt, she decided to try two more wings. Then she couldn’t stop and she ate wing after wing until all eight of the wings were gone. 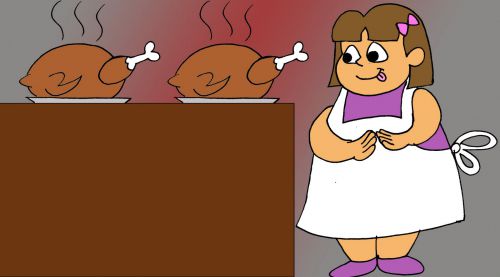 “Nothing to worry about! No one will notice the missing chicken wings,” she calmed herself. Having reassured herself, she then took a chicken leg to check if it was properly cooked and then couldn’t help herself but try one more. One  by one, Gretel ate all the eight of the chicken legs. She was little worried about the missing legs but she hoped that none of her master’s friends would find out.

Gretel took out the chickens from the oven when they were ready, and the smell of the roasted meat was so tempting that she decided to eat one of the chickens and leave three for everyone else which was still plenty to go around. She ate the chicken but one was not enough and Gretel started eating the second one. Shortly all the four chickens were gone. Now Gretel was terrified. “Oh, my, What have I done? The dinner should be served in an hour and I ate it all,” Gretel trembled.

At that moment, Gretel heard a knock at the kitchen door. She opened it and saw a stranger there who asked Gretel the way to the next village. Gretel, who was very clever said to the man, “Listen, It is this way to the next village, but make sure you run as fast as you can because my cruel master likes to cut off the ears of the strangers.” Having heard this, the man ran as fast as he could down the road.

Gretel ran to her master and told him that a stranger had come to the kitchen and stolen the chickens she had cooked for dinner and had run off with them to the next village. Gretel’s master gave chase to the stranger and shouted, “Give me just one!” The stranger thought he meant thought he meant to give one of his ears so ran away even faster in fright.

Here is a visual depiction of one of the best short funny stories for kids, “Clever Gretel”. See the video story below,