This is one of the best bedtime stories for infants. Every sunrise at Freedom Farm, Daddy Rooster climbed on top of the highest fence post and called out, “Cock-A-Doodle- DOO!” The other animals began to wake but Little Rooster covered his ears and closed his eyes. “No more sleep this morning,” laughed Daddy Rooster. “It’s time to practice!”

“Practice what?” yawned Little Rooster. “Your wake-up call. I’m going away for a week and you’ll be in charge every day that I’m gone.” “But the sun isn’t out yet,” protested Little Rooster. “I know, isn’t it exciting?” replied Daddy Rooster as he pointed out at the shadowy horizon. “Do I have to?” whined Little Rooster. Also, read The Little Star And His Mother. 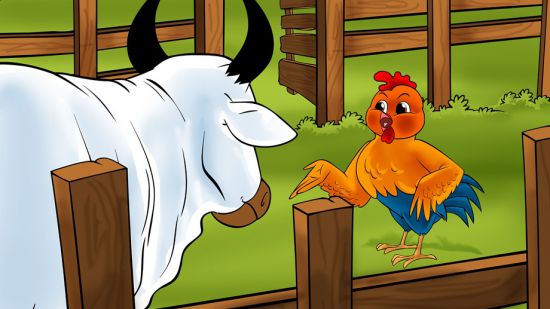 “Well, someone has to,” said Daddy Rooster. “If we won’t wake up the farmer, they can’t lead the cows to pasture. If the cows don’t eat, they don’t make milk. And if there’s no milk, the farmers don’t have money. And that means we don’t get any corn.” Little Rooster’s tummy rumbled.

“Being a rooster is too much work. It’s not fair,” pouted Little Rooster. Daddy Rooster scratched his white and red feathers and came up with an idea. “If you don’t like your chores, you could always switch chores with another animal.”

Little Rooster let out a little squawk. He raced into the barn to see if any of the other farm animals would switch chores so he could sleep in longer while his father was away. Inside the barn, Little Rooster counted three pigs snoring in the mud. Six horses slept soundly. A dozen cows stood still in their stalls. “How easy their lives must be,” he thought. You may also like to read, Going A Traveling.

“Excuse me,” spoke the Little Rooster. “Cock-A-Doodle WHO want to switch chores?” Mama Cow lifted her tail higher than the horses and pigs. “Me!” she mooed. Little Rooster used his beak to tell Mama Cow out of her stall. “Now you have to crow before dawn every morning,” Little Rooster instructed. Mama Cow left the barn and Little Rooster took her place.

The horses in the barn whinnied their laughter. The pigs oinked. “Quiet!” snapped the Little Rooster, hushing all of the animals as he lay back down to sleep. As Little Rooster was counting sheep so he could fall asleep, a horrible odor jolted his eyes back open. He stood up and ran toward the next stall, squawking about the foul smell. “Cock-A-Doodle EWW…” he yelled when he stepped in something mushy.

Soon after, Framer Fred entered the barn. “Time for the cows to go to pasture!” Little Rooster followed the cows past the vegetable gardens, beyond the rows of yellow corns, and into a grassy meadow. By the time he reached the field, Little Rooster’s thin legs were exhausted. He hungrily chomped a mouthful of bright green grass and white clovers as the other cows were doing. “Cock-A-Doodle PHOO!” he spit it out. Also, read Little Toy Train Story.

“Isn’t there anything else to eat?” asked Little Rooster. The other cows shook their heads. “Our first chore is to eat!” they replied. “Usually we make it a contest to see who can eat the most clovers!” Little Rooster choked down bite after bite, until he couldn’t take anymore. He couldn’t even eat half as much as the other cows ate.

Luckily, Farmer Fred rang a bell in the afternoon and the cows headed back past the yellow cornfields, vegetable gardens, and into the barn. Little Rooster was the last animal to reach his stall, where he plopped down to rest. “Okay, cows, fill the buckets three-quaters full today,” said Farmer Fred as he placed a metal pail in front of each cow. Framer Fred came over squeezing his fists as he approached the stall.

Suddenly, his one chore as a rooster seemed like much less work than the many chores of a cow. “Cock-A-Doodle I’M THROUGH!” Little Rooster scurried out of the barn, past the vegetable garden, and toward the fence where Mama Cow was practicing her crow. “Cock-A-Doodle MOO!” Mama Cow called as she greeted Little Rooster. “I just can’t seem to get that last part, right?” she grunted. “Any chance you want to switch chores again?” You may also like to read, Rosette And Annette.

“Cock-A-Doodle I DO!” exclaimed Little Rooster as she hopped onto the highest fence post. From that moment on, mornings on Freedom Farm were always bright for Little Rooster- even when it was still dark out!

Here is a short visual depiction of one of the bedtime stories for infants “Cock A Doodle Moo”. See the video story below,