This is an amazing moral story for kids, Control Your Anger. Rick was a nice, young boy who had a very bad habit of getting angry at every little thing. He would easily get angry at anyone and would even use foul language sometimes. His parents and teachers often lectured him to control his anger and improving his behavior. “Stop irritating me!” Rick would say.

Rick had a soft corner for paintings. So, on his seventh birthday, his mom gifted him a canvas and a palette of colors. “What’s this for?” Rick asked. His mom replied, “It’s to help you express your anger! Whatever you feel angry about, you can paint it on the canvas to get rid of that frustration. Try it!” Also, read True Friendship. 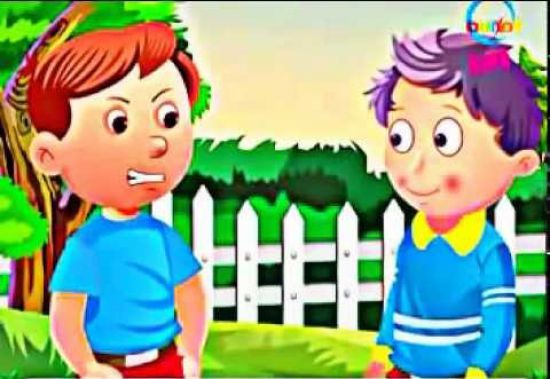 Image Source@ www.youtube.com.  Rick painted a building falling down and said, “It’s what I want to do to my school. I hate everyone there. The kids keep bullying and criticizing me. I feel so angry at them.” “Oh, Rick! Do it again! Paint whatever you feel inside and whatever you think you want to do.” Rick took another sheet and started painting. From that day, whatever made Rick angry had to be painted on a sheet.

By the weekend, Rick had painted several disturbing paintings. His mom went to his room and found some of the paintings on the wall. She collected some and took Rick to the garden with his paintings. “Tell me, Rick, what are these paintings about?” asked his mother. “It’s about those kids that always act so smart. They flash their expensive clothes and phones and make me look like a loser. The next is the teacher who keeps saying that I don’t perform well enough. The third painting is about the dad who always keeps reminding me of how well he used to do when he was my age,” said Rick. Also, read Always Help Others.

“Hmm… Now think and tell me what is the one thing common in all of them?” his mother asked. “I’m angry at all of them,” replied Rick. “Exactly! You reacted to each person who said something bad about you or criticized you. Your anger was in their power not to yours,” exclaimed his mom. “You’re right! In fact, while painting this, I threw the colors on my paintings imagining that I was throwing something at them. I never tried to understand them and was getting angry all along without any reason,” said Rick.

Rick’s mom told Rick, “Each bad word that you said to them left a hole in their heart. Those kids did well for themselves, not to put you down. Your teachers tell you to improve because they know your potential and dad compares himself with you only to inspire you, to tell you that if he was able to do it, so can you!” “You’re right, mom! But anger overpowers me and I’m not able to think properly!”

His mother told him that whenever he gets angry, he could take a deep breath and count to twenty before he reacts. She also told her to think happy thoughts and divert himself from that situation. By this, slowly and steadily, he would be able to control his anger. Rick thanked his mom and promised to try this and kept on painting.

After a long time, he hugged his mom and felt good. With time, Rick’s behavior changed. He was a much happier kid than before and started treating everyone with love. His paintings, too, had changed as they were less about anger and more about happiness and love. All of this was possible as he had learned the art of having control over his anger.

Here is a visual depiction of an amazing moral story for kids, “Control Your Anger“. See the video story below,