This is one of the best panchatantra stories for kids. Once upon a time, in a lake lived an old crane. He was so old that it was becoming almost impossible for him to hunt for food. One day, he was standing on a rock crying pitiably, when a crab came to him and said, “Uncle, what makes you so unhappy that you are shedding tears standing all alone by the bank?” The smart crane realized this could be his opportunity.

“I now repent for my sins of eating the fish in this lake during all these years,” the crane replied. The crab was surprised. He said, “What makes you think this way?” The crane replied, “I have heard that a dark future is forecast for these fish. It is said that there will be no rain in the coming two decades and all our lakes will dry up. So, all the fishes you are seeing today will perish one by one. If I eat any fish, soon there will be none.” 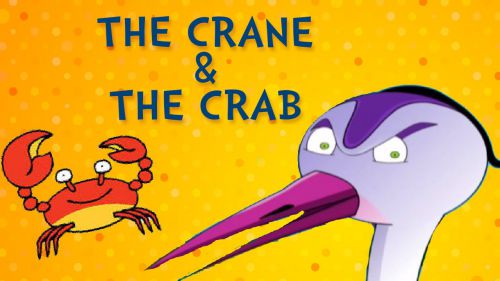 The crab asked the crane for a solution and sure enough, the crane offered to help the fish by ferrying them to a bigger lake one by one. Just as the crane had expected, the crab carried the word to all the fish living in the waters. The innocent fishes trusted the crane, who carried one everyday in his beak. He would go a distance and then smash the unsuspecting fish against the rock, kill it and eat it.

For days, the crane feasted on one fish after the other, until it was the crab’s turn. The crab had been waiting for his chance with all excitement. He told the crane, “Uncle, it is finally my turn to go and swim in the waters of the new lake.” The crane carried the crab on his back and walked the distance he always did. Soon the crab could see piles of fish bones lying at a distance. He quickly realized what the crane had been doing so long.

He asked the crane, “Uncle, why do I see so many bones lying around?” The crane replied, “You have been foolish to trust me. Now you will die the death your fish friends died.” The crab was quick to answer. He said, “Is it?” and before the crane could react, he had bitten the crane’s neck to death. He then took the neck back to the lake where the other fishes were waiting for the crane to come back and take them. He told the fishes, “From now on, we have learnt not to trust anyone so quickly!” The remaining fishes rejoiced at the crab’s act, which had saved their lives.

Here is a short visual depiction of this panchatantra stories, “Crane And Crab“. See the video story below,