This is the Crocodile and Monkey Story for kids. Once upon a time in a beautiful jungle, there was a lovely pond. In the pond, there lived a large yet gentle crocodile and on the nearby tree lived a very smart monkey. The monkey and the crocodile were very good friends.

Every day, the monkey would pluck some juicy apples for the crocodile and give them to him when he came to visit him in the morning. In the afternoon, the crocodile would swim to the center of the pond and pick some fishes and carry them back to the monkey. The two friends played together and talked for hours. Also read, The Clever Monkey Story. 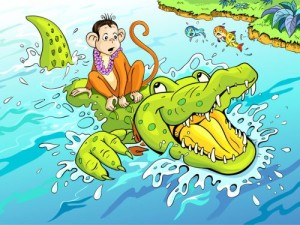 Image Source@ youtube.com One day, the crocodile met a lady crocodile. When she heard that he had a monkey as his friend, she felt greedy and wanted to eat the monkey. That night, before going to sleep, she ordered the crocodile to get the heart of the monkey for her so that she could look more beautiful as she had heard this somewhere.

She asked him to invite the monkey for lunch at their place where she would kill the monkey and eat his heart. The crocodile became very sad and quiet. Finally, he promised her to bring the monkey tomorrow.

The next day, when the monkey met the crocodile, he noticed that something was wrong. The crocodile asked him for a ride. He quickly sat on the crocodile’s back. The crocodile told the monkey that he has promised his wife that he would bring him as her lunch so that she could become more beautiful. You may also like to read, Two Cats And A Monkey.

The monkey was so clever that he told the crocodile that he left his heart with the apples. The kind crocodile swam back to the tree. As he came back, the monkey jumped off the crocodile’s back. He said to him, “You were foolish not only to believe me but also to what your wife said!” Saying this, the monkey went into the jungle leaving the sad crocodile behind.

Here is a short visual depiction of “Crocodile and Monkey Story“. See the video story below,