This is one of the good moral stories for kids to read. There lived a crow and a deer who were friends right from their young age. There lived a fox too which longed to eat the plumpy and healthy deer. “Yummy it will be if I have this deer for lunch. First, I should win the confidence of the deer,” the sly fox thought. Also, read The Clever Deer.

The next day, the fox came to the place where the deer and the crow were chatting as usual. “Hi, I have seen you many days together and I wish to be your friend!” he said. To this, the crow said, “Sorry, how can you be friendly with us!” The fox was really clever and cross-questioned him, “Why can’t a fox be a friend with a crow and deer? Please give me a chance to prove myself. I will be a good friend!” 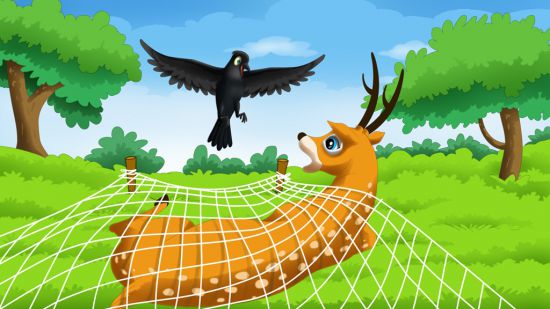 Although the clever fox couldn’t convince the crow, the deer was almost convinced with his words. The deer said to the crow, “Oh, he seems to be nice. We can meet him as a friend!” “Are you in your senses? It’s not possible!” shouted the crow. “That’s okay friends! I’ll take your leave!” said the fox calmly and immediately left from there.

The next day when the deer was alone, the fox came and started talking to the deer in a very sweet tone. “Hi, there’s a farm nearby where crops are in abundant. You can have fresh, green leaves if you go there,” suggested the fox, The deer fell for the words of the fox and changed its mind. “Okay, let’s go!” agreed deer. Soon, the fox took the deer to that field and the deer jumped with joy.

When it saw the field, it went hopping and started eating the grass happily. “Oh, thank you! I had my fill. Let’s go back to the jungle,” said the deer. The fox thought for a while and implemented its second plan. It said ill about the crow and the deer stopped meeting the crow. From then on, both the fox and the deer went together to the field. Also, read The Vain Crows.

Those crops belonged to a farmer. One day as he was surveying his field, he saw that his field was destroyed. He became very angry and soon identified the footsteps of the deer. Immediately, he made a plan to catch the deer and spread the net all over the field.

The next day, the deer, as usual, came to the field, only to be trapped in the net spread by the farmer. The deer was trapped at once as it entered the field. The fox was very happy to see this as it was the part of his plan. “My lunch is waiting for me,” the fox thought to himself with his mouth watered. The excited fox suddenly went behind a tree to hide.

Meanwhile, the crow happened to flew above the farm. “Looks like my friend! She’s in trouble. I need to help her,” the crow said to himself. “Oh, my friend! Forgive me! I deserve this for not listening to you. You’ve warned me against the fox,” cried the deer. You may also like to read, The Banyan Deer.

As the farmer was approaching the field, the crow told him to pretend as if it was dead. According to their plan, the crow pricked the eyes of the deer. Soon, the farmer thought that the deer is dead. The moment, the farmer took the net, the deer ran as fast as it could. The crow saved the deer and they became the best friends once again.

MORAL OF THE STORY: YOU SHOULD NEVER TRUST STRANGERS AND ALWAYS LISTEN TO YOUR NEAR AND DEAR ONES.

Here is a short visual depiction of one of the good moral stories for kids “Crow And Deer Story“. See the video story below,