Here is one of the best bible stories for children, “David And Goliath Story“. A long long time ago, the god was looking for a new king of Israel to replace King Saul, who had displeased him. The god sent his servant Samuel to the house of Jesse and asked him to anoint one of his sons. The youngest, David, a young boy of fifteen with bright blue eyes and rosy cheeks was chosen as the one and anointed.

Since that day, god’s spirit was always with David. King Saul was not happy because he had not made peace with God. David used to play the harp very well. So, Saul’s servants thought that beautiful music played by David would cheer him up. And it did. David’s music made the king feel better and slowly David was adored by the king. 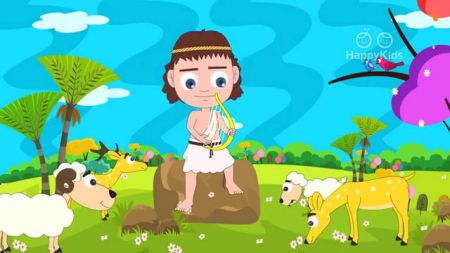 However, King Saul was unaware of the fact that David was anointed by Samuel and that he would become the future king of Israel. While Saul was the king of Isreal, the philistines continued to battle with them. One of the philistines was a huge giant named Goliath. Goliath was nine feet tall and it was impossible for anyone to fight him. He kept on daring Israelites telling them, “Philistines will become the servants of Isreal if someone could fight Goliath.” But King Saul and his army were scared.

David was very courageous and was not afraid of Goliath. With his shepherd staff in his hands, David went down to fight Goliath. David took out his slingshot and picked up five stones from a stream. He openly challenged Goliath and said, “Come with a sword!” Goliath noticed that David was carrying a shepherd staff and laughed at David but David was not afraid. David ran towards Goliath, put a stone in his slingshot, and hurt the giant with the stone deeply at his forehead. Surprisingly, Goliath fell to the ground and David won a great victory on Israel. Finally, David saved Israel from Goliath.

Here is a visual depiction of one of the best bible stories for children, “David And Goliath Story”. See the video story below,