Despicable Me Minions (Part 2): The Journey To Crown

This is the second part of Despicable Me Minions short story. Bob, Kevin and Stuart are very excited for their first mission. By using the brilliant disguise, the minions sneak into the tower of London, where the crown is kept. They work as a team using Herb;s evil gadgets along the way. Stuart hypnotises all the guards by the Hypno- Hat, Kevin blasts the door with his Lava- Lamp Gun. “Topalino la crowna!” Kevin says. The crown is in it’s case in front of them.

Bob uses his stretch suit to cut through the top of the metal case, opening it like a can opener. He reaches in, and in is gloved hand grazes the crown’s sparkly jewels. Only a few more inches and Scarlet’s heist will be complete. But just as Bob is about to wrap his fingers around the treasure the crown starts moving as it’s being taken to the queen. 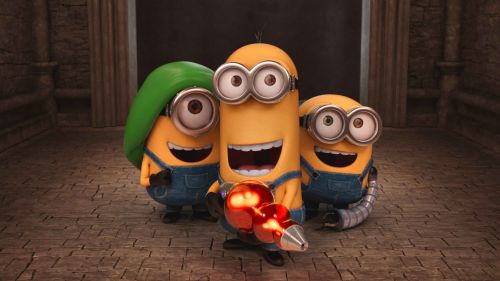 The queen’s guards are carrying the crown to her carriage. They place it on her head. The crown is getting farther and farther away from the minions. Suddenly, Bob activates his stretch suit’s legs. He grabs Kevin and Stuart and tosses them onto the carriage. Kevin tries to steer the carriage while Stuart attempts to snatch the crown from the queen’s head. The carriage gets out of control but Bob somehow manages with his stretch suit and save the carriage from falling into the river Thames but it crashes with a big tree!

As the dust settles, Stuart grabs the crown from the queen. But policemen arrive and immediately chase after the Minions. They tackle Kevin and Stuart but Bob keeps running! Bob runs all the way to the Sword in the stone! He grabs the sword’s handle hoping the sword will scare away the policemen. He doesn’t know that according to the sword legend, only the one true king can pry it from the stone! Miraculously, he gives it a tug, and pulls it loose!

The crowd gasps! Even the police officers are stunned. “It can’t be! The legend has been fulfilled,” a man exclaims. The one to remove the sword from the stone will be named as England’s leader. “The bald yellow child is our new King! YOUR MAJESTY!” everyone says dropping their knees. “Uh scusa!” says Bob excitedly. 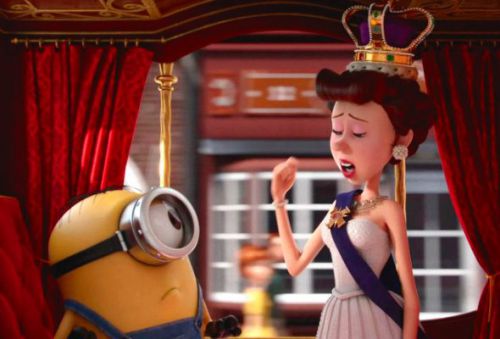