This is the short story of Disney Bambi. Once upon a time, there was a forest where many animals lived in harmony. All of them shared a very special bond and were best of friends.

One morning, a little rabbit named Tambor went to wake up the owl to go and see a little fawn that had just been born. All the animals of the forest got together to meet the new baby deer, Bambi! Everyone became really good friends with him and they started showing him everything in the forest, like the flowers, the rivers, and they told him the names of all the animals. Every day, they got together in the clearing to play and learn. Also, read Dumbo- The Flying Elephant. 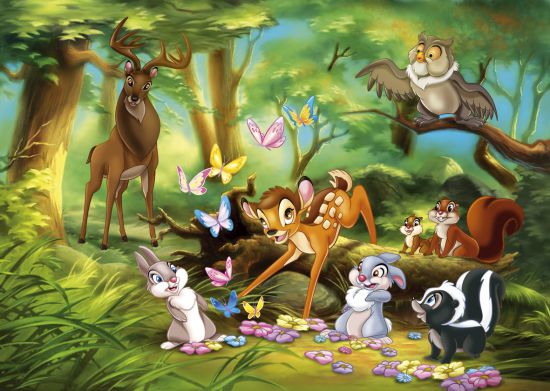 Image Source–> in.pinterest.com. One morning, Bambi’s mother took him to see his father who was the head of the herd of deer. It was his job to look after all of the rest of the deer. When Bambi and his father were casually walking in the forest, they heard dogs barking. “Run Bambi run!” said his father, trying to save him. “But why father?” cried, Bambi. “It’s the humans, and every time they come to the forest, they try to hunt us.”

A few days passed after this encounter with the humans and Bambi’s father showed him all he needed to know for when the day came for Bambi to be the head of the herd. Bambi then met another deer that was very beautiful. Her name was Farina and they fell in love with each other immediately.

One day, both of them were playing when they heard the sound barking of the dogs. Bambi thought to himself, “Oh, no! It’s the humans!” and he tried to find the cover and hide. By the time he thought of a plan, the dogs were so close that if he wanted to save Farina, he was left with no choice but to stand between her and the dogs. Once she was safe, Bambi tried to save himself and run from the dogs. You may also like to read, What Tiggers Do Best.

Just when he thought he was free, he encountered a cliff that he had to jump. The hunters fired their shots missing Bambi but the fall injured him when he landed by the river. At that moment, his father and all his friends came to help him cross the river. Once they crossed the river, they would be free from the danger of the humans. When they made it cross, they tended to Bambi’s wounds and he made a swift recovery.

Time passed and our hero, Bambi grew up to become a big buck. He went to see his friends and it was hard for them to recognize him because he had grown so much. Now, he even had big, beautiful antlers. By this time, the owl was old and wise and Tambor had married a little rabbit and they had three baby rabbits.

Bambi married Farina and they had a little fawn. Like Bambi did in his childhood, his baby followed his footsteps. The baby deer went to meet all the animals of the forest just like Bambi did when he was young. Everyone lived very happily and Bambi was now the head of the herd. Just like his father before him, who had become too old t look after the others. So now, it was Bambi’s job to look after the forest. Also, read Mickey, Minnie, And Gingerbread House.

Here is a short visual depiction of the “Disney Bambi Story”. See the video story below,