This is the Disney Tangled Story. Once upon a time, a long time ago, deep in a forest lived an evil witch. Gothel, the evil witch had a magical flower, that helped her hide her true age. This flower had great healing flowers.

Now, not far from the forest was a kingdom. The queen of the kingdom had been expecting a child for long. But due to certain unexpected complexities, she had endangered her own life as well as of the unborn child. Now, in search for something to save the queen’s life and the unborn child, the soldiers found the flower Gothel had in her garden. Also, read Rapunzel Story. 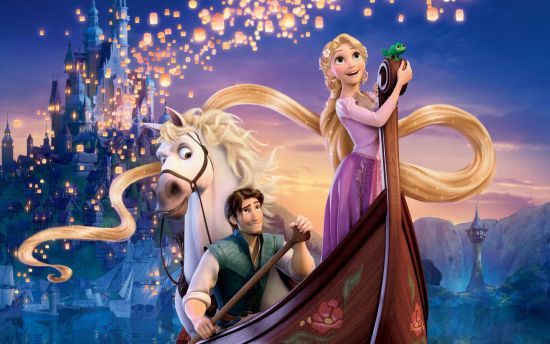 Image Source–> centerforcreativemedia.com. The flower was given to the queen and the queen quickly recovered. And soon a beautiful baby princess was welcomed. While celebrations enveloped the kingdom, Gothel, the evil witch cried in agony upon finding her flower being stolen. But soon, she heard that the daughter of the king held the same powers as the flower. It was the hair of the princess to be exact. She also came to know that if the hair was cut off the golden hair turned black and lost powers.

So, alone she hatched a plan and implemented it too. She sneaked into the castle and stole the princess away in the dead of the night. The poor infant of a princess was taken away to a high-walled tower, that was Gothel’s home and locked in the highest room. “She shall stay here, and help me disguise my age, forever and ever more!”

Poor princess grew in the castle tower not knowing who she truly was until she met with an intruder and had an adventure. Flynn Rider, a well-known bandit enters Rapunzel’s castle in search of something to steal. But he had not anticipated that he would be knocked out and captured! When he woke, he found a girl with long beautiful golden locks staring at him. “Who are you? Why are you here?”

Now, Flynn Rider has run away from the kingdom after stealing the Rapunzel’s crown. But before Flynn could say something, Rapunzel begins searching his things and discovers the crown. Unaware that it was her very own crown she cracks a deal with the thief. Hiding the crown she says, “You shall take me to see the lanterns and when we return after you fulfill that deal, I’ll return your crown!” You may also like to read, Pocahontas Story.

Now, every year the king and queen realized sky lanterns in hope of their lost daughter’s return. Flynn agreed, hesitantly. And so Rapunzel introduced Flynn to Gothel, in hopes of showing her mother that she could take care of herself. But this only enrages Gothel, so Gothel tells her that she would bring Rapunzel magic paint. “Now, the mother will be away for three days,” Gothel said before departing to get the paint. “Behave well, Rapunzel. Know that mother loves you.”

But Rapunzel had her eyes set on the sky lanterns. So, she called Flynn Rider and persuaded him to take her with him. While they were on their way, the duo comes to a pub. Rapunzel’s mother, Gothel had warned her of such people. But she finds out that they were nice people. Who also helped them escape when the royal soldiers came for Flynn Rider.

But as the two are making their way, the dam breaks and water surrounds them. Flynn thinks that he would die so he tells her his real name, Eugene Fitzherbert. Rapunzel too reveals that her hair glowed when she sang. In the end, Rapunzel’s glowing hair saved their lives. Gothel, while on her way to get the magic paint for Rapunzel, spots Rapunzel with Flynn.

At night, when Rapunzel and Flynn had just gotten away from the broken dam and its waters, Gothel along with Stabbingtons who used to be Flynn’s partners, shows Rapunzel the crown and challenges her to think more about Flynn’s interest. Rapunzel and Flynn don’t talk that night after that. But the next morning, Maximus, the lead horse of the royal army finds Flynn and tried to take him away. But Rapunzel tells them that it is her birthday, and they should be friendly.

Finally getting them to be friends they go to the kingdom. There they enjoy the festivities all day long. Rapunzel gives the crown back to Flynn. Before he could say something he sees the Stabbingtons and decides to return the crown. What he did not know, was that the Stabbingtons were planning to betray him and were now partnered with Gothel. So they tied Flynn up and threw him in a boat and tell Rapunzel that Flynn ran off with the crown.

Eugene is sentenced to death. Hearing this, Eugene’s friends from the pub help him and get him out. While in the tower, Rapunzel realizes that she was the lost princess. She confronts Gothel, who only becomes angry.

Maximus, the royal horse helps Eugene to reach the tower. He climbs as fast as he could only to found Rapunzel in chains. While he tries to save her, Gothel stabs him leaving Rapunzel in shock. Rapunzel begs her Gothel to save him and then agrees to a lifelong captivity if only she was allowed to heal Flynn. Gothel happy with this unchains Rapunzel who cries as she sings trying to heal dying Eugene.

As Eugene dies, he cuts off Rapunzel’s hair, killing all the magic, and rapidly killing Gothel. As Rapunzel cries, a teardrop falls on Eugene’s face. It turns out that her tears still have the healing powers and Eugene slowly comes back to life. After that, they return to their kingdom. The king and queen become extremely happy after seeing their daughter. Eugene’s crimes are pardoned. And the kingdom celebrates the return of their princess. Also, read Disney Princess Aurora Story.

Here is a short visual depiction of the “Disney Tangled Story“. See the video story below,