Disney’s Adventures Of The Gummi Bears

This is the short story of the Disney’s Adventures Of The Gummi Bears. Once upon a time, very long ago in Gummi Clen lived many Gummi bears. In one house lived six Gummi Bears. Gruffi, Grammi, Zummi, Tummi, Sunni and Chubbi were their names. One day, Grammi became angry while playing a puzzle game with Gruffi and stormed out leaving Gruffi alone. When the others saw these two fight they decided to pick out some gummi berries for them.

While they were picking out the berries everyone’s basket was full except for Tummi’s. “I am hungry,” complained Tummi. Just then a rabbit ran between Tummi’s feet. “The poor rabbit looked scared to death!” Tummi observed. What Tummi didn’t know was that the poor rabbit was being hunted! You may also like to read, Peter Pan Story. 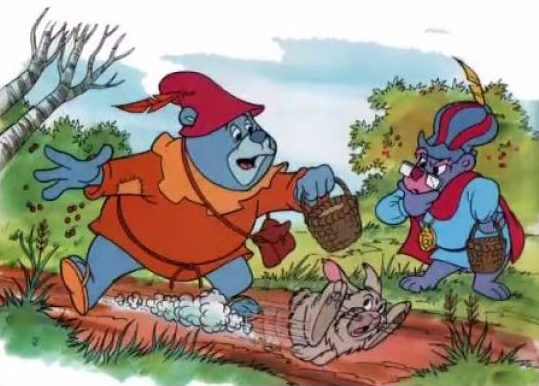 disney’s adventures of the gummi bears

Image Source–> disney.wikia.com. Further, the poor rabbit ran into a large net while she was trying to get away. Large, lanky hands picked the poor rabbit up. “You mindless rabbit, you can’t run from me. Nothing escapes the great Davini,” laughed he. “But I will give you one chance to escape!” saying that he let the rabbit go, but before the rabbit could run away he sprinkled some powder on it, which instantly turned her into a stone. “Yet another addition to my collection!” laughed the man.

He took the rabbit and put it with his collection. “Good thing that I stole the magic powder. Now everyone will believe that I am a good sculptor!” he laughed. Just then he heard the bells of his cages ring. “Ah, more prey, more sculptures!” he ran to his cages, where he found the Gummi bears. “What?” he asked, for he thought Gummi bears did not exist but in fairytales.

The Gummi bears looked at each other uncomfortably.  Zummi, tried to fool Davini by saying “We are only dressed like Gummi Bears, we aren’t real Gummi Bears!”  When it began to grow darker, Gruffi decided to go look for others without Grammi. Gruffi soon found the others and Davini. But Gruffi did not know that Grammi too was spying on the others. “Give me nice poses, and I might let you go,” said the man. But instead of letting them go he turned them into stone. Also, read Mary Poppins Story.

“They will fetch me a fortune,” the man thought. Just as he was collecting his prized collections, Gruffi swung over the man’s head with a vine. But since his jump was ill-timed, he fell right into the net Grammi was aiming at the man’s head. “What did you do that for? You ruined everything Grammi!,” yelled Gruffi. But before they could continue with their argument, the man ran after them. “More Gummi bears for my collection!” he laughed.

But Davini couldn’t catch them, so he left without them. When he was gone with his wagon, Gruffi popped out of the bushes and along with Grammi, Gruffi snuck into Davini’s wagon, unnoticed. Soon, Davini stopped the wagon near the royal courtyard, showing off his sculptures. He was happy that people were marveling at his creations!

While Gruffi and Grammi decided what to do next, Davini stomped inside the wagon. “Picky!” he screamed pulling out a tablet. He then chanted some words from the tablet to an eagle, which turned back into flesh from stone! Davini left with the eagle muttering about how the eagle should please someone. Soon after, the king came to visit along with the young prince and princess. Davini showed the Gummi bears’ statues, saying he made those statues especially for the prince and the princess.

Meanwhile, the two bears crawled out of hiding and sneaked inside the castle. On the other hand, prince Cavin went to Davini’s room with a tray of desserts.While Davini talked to Cavin, the two bears snuck into Davini’s room stealing the tablet. But the tablet slipped and broke, Davini tried to chase the bears but failed. Then, the two bears and Cavin snuck into the princess’ room with the broken tablet pieces. Gruffi and Grammi pieced the tablet together and chanted the words written on it. The statutes of the bears came to life again. The Gummi bears ran away. You may also like to read, A Bug’s Life.

But as soon they were gone, Davini burst into the princess’ room in search of the bears. “I know you’re here!” he shouted waking the princess, who only got mad at him. Davini froze the princess in a fit of anger. When Davini ran out to the courtyard in search of the Gummi bears, he found them sitting with the tablet, “we suppose we could be partners!” they suggested. But Davini did not want that, he was about to throw the magic powder on them but Chubbi stole it away.

The Gummi Bears gave him a chance to run away. Davini thought he was free, he pulled his wagon and rode off. But what he did not guess was that the Gummi bears would unfreeze all the animals and the animals would come after Davini. Grammi tossed the tablet away saying they don’t need it anymore. The prince jumped up to catch the tablet just in the nick of time, “my sister is still frozen”, he said. The princess was unfrozen after the magic spell and the bears returned home happily and safely. Also, read, Rikki Tikki Tavi Story.

Here is a short visual depiction of the “The Disney’s Adventures Of The Gummi Bears”. See the video story below,

The Disney’s Adventures Of The Gummi Bears Video