This is one of the best the Grimm brothers fairy tales for kids. Once upon a time, there is a poor peasant named Mr. Crabb. He has two oxen on which he uses to lay the load of the wood. In the town, he uses to sell the woods to the rich doctor and two thalers. When the peasant sees how well the doctor eats and drinks, his heart take a longing for the same things.

The next day, when Mr. Crabb goes to a rich doctor and asks, “How can I be a doctor?” “Sell your oxen, buy an ABC Book, buy some nice clothes. Then you can be a doctor,” says the rich doctor. Mr. Crabb does all of these things. He puts “Dr. Know-All” on his door. You may also like to read, The Mother Holle. 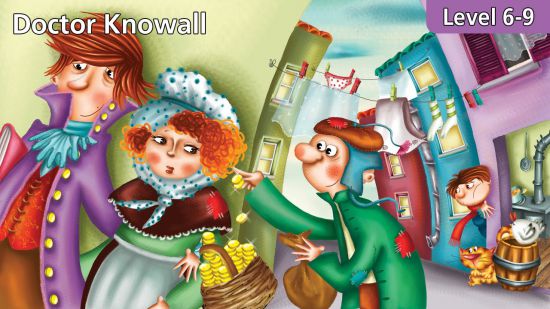 Image Source–> www.youtube.com. Many people come to see him. One day, a rich man comes to his room. “Dr. Know-all, you must help me!” says the rich man. “I cannot find my money. Please, come for the dinner and help me finding my belongings!” Dr. Know-all and his wife are set to go to the rich man’s house.

Mr. Crabb and his wife go with the rich man. “Let’s eat before you look for my money!” says the rich man. A servant brings a dish in the room. “That’s the first!” says Mr. Crabb to his wife. Mr. Crabb is talking about the food but the servant with the dish is surprised. When the second servant comes into the room, Dr. Know-all says that this is the second. The servant goes back and his hands are shaking.

Yet another dish came. This time, it is the third servant who comes with the dish. “This is the third one,” the doctor says to his wife. When the fourth servant comes, the king asks, “What is this food, Dr. Know-all?” But Mr. Crabb does not know. “Oh! Poor crab!” he says. “You are right,” says the rich man. “Dr. Know-all knows all!” Now, all of the four servants are very scared of him. Also, read The Three Feathers.

The four servants talk in the kitchen. “Dr. Know-all knows all!” says one of them. “Yes, he knows that we have the money,” says the other servant. The servants ask Mr. Crabb to come to the kitchen. “We have the money,” the servants confesses. “It is under the carpet! Please, don’t say to our master that we have stolen his money or else that rich man will kill us. Also, they offer him a handsome amount in addition if he will not tell it to the rich man.

“Can you find my money?” asks the rich man. “Let me look in my book,” says Mr. Crabb. Mr. Crabb looks and then says, “I know!” Dr. Know-all points to the floor where the carpet is and says, “Here is your money!” The rich man thank Dr. Know-all and promises to give some share. “Thank you, Dr. Know-all,” says the servants. Dr. Know-all receives a large reward from each side and becomes famous from that very day. You may also like to read, Old Sultan Story.

Here is a visual depiction of one of the great the Grimm Brothers fairy tales, “Doctor Know-All”. See the video story below,