This is Dumbo and Timothy Story for kids.”Whee!” cried Timothy Mouse as he flew through the air atop Dumbo’s hat. The little elephant used his giant ears to zoom straight to the very top of the circus tent. “Way to go!” whooped Timothy Mouse. “Can we try a loop-de-loop next?” asked Timothy.

Dumbo nodded eagerly and flapped his ears to gain speed. Soon, he was swooping down, then up, around, and down, and across the tent again. “That was our best loop-de-loop yet!” exclaimed Timothy. Dumbo smiled as he landed on the ground. “Great rehearsal,” Timothy told Dumbo. “But I think we’ve practiced enough this morning. What do you say we take a break?” Also, read Dumbo- The Flying Elephant. 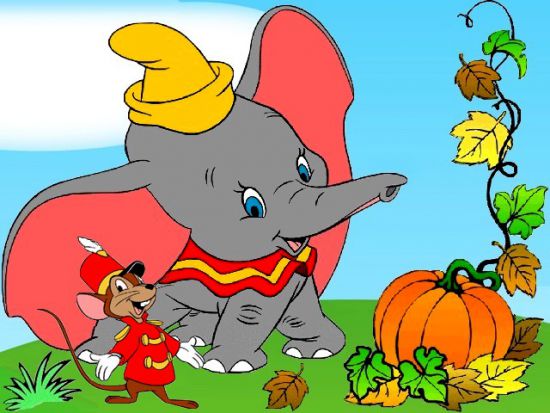 “Oh, it’s Timothy Mouse!” squealed a girl mouse. “Oh, isn’t he cute?” said her friend. “You can have the rest of the morning off,” Timothy told Dumbo with a wink as his fans dragged him away. “Take a nap. You’ll practice later.” Dumbo nodded sleepily. That sounded like a good idea to him. The little elephant made his way toward the circus train car where he lived with his mother and Timothy.

Suddenly, he heard someone shout, “Oh no! My beautiful balloons! They’re floating away!” Sure enough, a big bunch of colorful balloons was drifting into the sky. Quickly, Dumbo sprang into action. As soon as he reached them, he grabbed the balloon strings tightly with his trunk. Dumbo carried balloons back to the balloon seller who took them gratefully. “Thanks, Dumbo, you’re the best! You saved my day!” said the man. Dumbo smiled a big smile. He was just happy he could help.

Dumbo waved goodbye to the man, readier than ever for his nap. As he walked towards his train car, however, he saw a crowd gathered in front of the circus tent. Using his trunk, Dumbo politely nudged his way in to see what was going on. A little girl stood in the middle of the crowd with tears streaming down her face. “I want my mommy,” she cried. “I think the poor kid is lost,” said a magician. “I bet her mom is as upset as she is,” a juggler said. Even the strong man was feeling sorry for her. “We’ve got to help her but how?” he asked. You may also like to read, Lady And The Tramp.

Dumbo walked over and gently tapped the little girl on the shoulder with his trunk. “Great idea, Dumbo!” exclaimed the juggler. “You can help the girl find her mother from the air.” With the girl on his back, Dumbo flew high above the circus tents. Holding on tight, the girl could see everything including her mother in the crowd. “There’s my mommy,” she shouted happily pointed to a woman on the ground. Dumbo landed and the girl ran into her mother’s open arms. “I was so worried,” said the girl’s mother. “Thank you, Dumbo!” Dumbo smiled back. He was just glad that he’d been there to help.

Now, Dumbo was really ready for that nap. But suddenly, a pie whizzed past his trunk. Dumbo turned to see some clowns practicing their pie-throwing act. In no time, they were covered with pink whipped cream from head to toe. “What a mess,” said one of the clowns, licking the pie filling from around his lips. “Shower time!” said another. Dumbo smiley at the gooey, sticky, pie-covered clowns and an idea popped into his head.

Dumbo flew over to a tank of water and filled his trunk. Then he flew back and sprayed the water all over the clowns with one big whoosh. Instantly, the pie was all washed away. “Thanks, Dumbo,” called the clowns as they laughed and waved. When Dumbo finally arrived at his train car, he sighed and looked around. No balloons were loose. No children were lost. And no clown needed rinsing off. Also, read Winnie The Pooh Story.

Dumbo snuggled down into the soft hay and very quickly fell asleep. A moment later, however, Timothy walked in. “Are you still sleeping Dumbo?” the mouse asked. “C’mon, wake up! It’s time to practice.” But Dumbo was too tired to even lift his head. “Well, that’s the last time I let you rest,” exclaimed Timothy. “From now on, it’s just practice, practice and practice.” Dumbo smiled without opening his eyes. That sounded fine to him. Practice would be easy compared to trying to get some rest.

Here is a visual depiction of, “ Dumbo And Timothy Story”. See the video story below,