This is the Easter Story For Kids. 3,000 years ago, God sent a man to earth, his name was Jesus. He was born under strange circumstances in Bethlehem. He grew up under the care of his mother Marie and father Joseph. When Jesus turned 13 years old, he started teaching people about God. He always helped others. He fed thousands of needy people with just a little bit of food, he made sick people better, he could stop the natural calamities and he could even awake the dead people back to life.

Jesus built the temple that Roman people had destroyed once. While some people loved him because of his kindness, some people were jealous of him and had planned to kill him. The Roman people who wanted to rule the province captured him. Soldiers took him to Golgotha, which means ‘The Place Of The Skull’. There, they gave him some wine mixed with a drug but he refused to drink. Also, read The Birth Of Jesus. 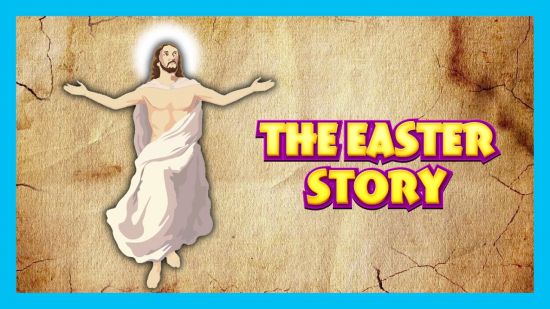 They nailed Jesus to the cross. The soldiers were gambling about who would get Jesus’s clothes. They nailed him to the cross at around 9’o clock in the morning. Soldiers also nailed two criminals with Jesus, one to his right and other to his left. People who passed by said terrible things about Jesus. They shook their heads and shouted, “So you are the one who built the temple again within three days! Save yourself and come down from the cross!” The chief priests also made fun of him and said to each other, “He can save others, but can’t save himself!” The two criminals also said cruel things to Jesus.

Around 3’o clock afternoon, the sky turned dark. That time, Jesus shattered and said, “My God! My God! I commit my spirit in your hands!” Jesus shattered and then died. At once, the curtains in the temple were torn apart from top to bottom. An Army Officer who was standing in front of crucified Jesus saw how Jesus had died, after seeing all this he said, “This man was really the son of God!”.

After his death, Jesus went up in heaven, and there he met god. All his pain and wounds had gone. The god told him that his followers need him and so he sent him to the Earth again to save his people. Jesus was Resurrected!

After the resurrection, Mother Marie bought some spices to put on Jesus’s body. She went to the tomb early morning with her two friends. On the way, they were discussing the big stone which is kept at the entrance. They were thinking that who would roll the big stone from there. But on reaching, they saw that the stone had been removed already. It was a huge stone. The women went into the tomb and on the right side, they saw a young man sitting. He was an angel. You may also like to read, The Baptism Of Christ.

Here is a short visual depiction of the “Easter Story For Kids“. See the video story below,