This is the Eklavya Story for kids to read. Eklavya was a tribal boy of the Mahabharata period. He was the simple son of the simple chiefdom. He was very fond of archery but unfortunately, he had no teacher apart from his father. The tribal boy wanted to learn archery so that he could save the poor deer from the terror of lion and leopards.

One day, he saw Guru Dronacharya teaching the Princes. They were the Kauravas and the Pandavas who were the Princes of the province called Hastinapura. Arjuna, one of the Pandavas was specialized in the art of archery. Dronacharya did not want any other to be as good as Arjuna. Also, read Zeus And The Potsherds. 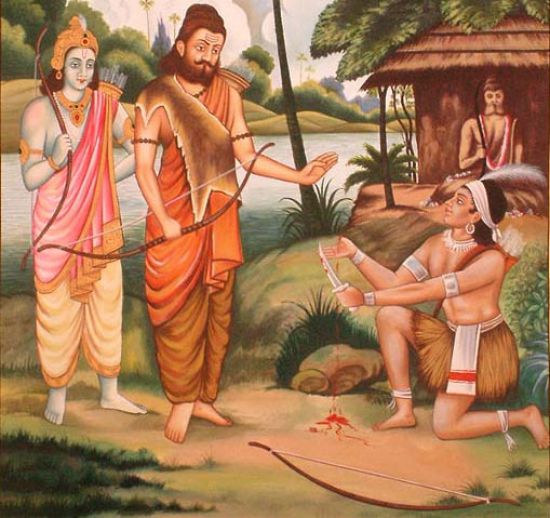 Not one to give up so easily, Eklavya carved an image of Guru Dronacharya with the clay and started practicing archery in front of his Guru. Over the many years, with all his practice and devotion towards Guru Dronacharya, he learned archery and become better than the princes of Hastinapura.

One day, a dog disturbed him while he was at his target practice. He shot five arrows so carefully into the dog’s mouth that they silenced the dog without harming the animal. Guru Dronacharya and his students happened to go that way. And they were surprised to see the dog had had so many arrows in his mouth and was silent but no hurt. Also, read Tenali Raman And The Proud Priest.

Soon, they found Eklavya practicing archery. Dronacharya was amazed at the skill of this tribal boy. Eklavya came and prostrated before his Guru. He welcomed his Guru with great honor and love. Dronacharya saw the clay image that Eklavya had made and realized that this was the same boy who came to him years back. And now, he had made him his own Guru.

Guru Dronacharya became angry as Eklavya had learned from him without his permission. So, he asked for the Guru Dakshina. Eklavya right away said, “What shall I give you?” Straight away, Drona replied, “Give me your right thumb!” Without any hesitation, Eklavya took out his knife and cut off his right thumb and placed it at the feet of Guru Dronacharya. Such was his devotion towards his teacher.

There are two sides of this story. One side of the story shows the injustice done to Eklavya but actually, Guru Dronacharya uplifted Eklavya from being his student to becoming an epitome of discipleship. Guru Dronacharya blessed Eklavya with immortality by asking him for his right thumb. So when people think of devotion, they think of Eklavya, and not Arjuna. Also, read Prometheus And The Two Roads.