The elephant and mahout went from shop to shop and the shopkeepers gave money to the elephant. The elephant, in turn blessed them. This was the routine. There was a tailor who had his shop in the town street. You may also like, Elephant and Ant Story. 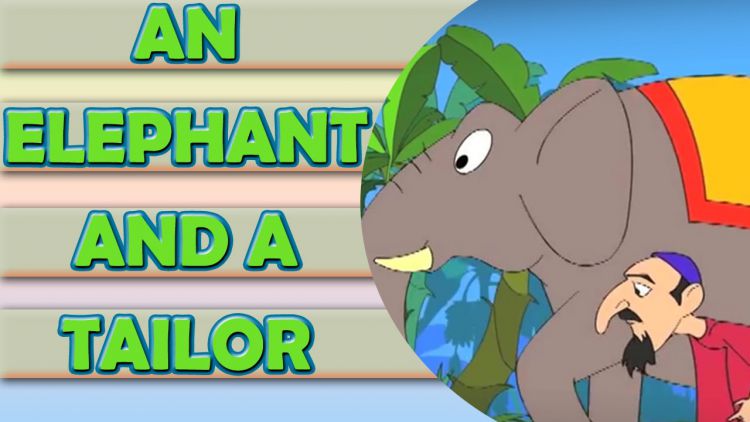 One day, as usual, the elephant came asking for money. “Ah! The elephant has come! It’s irritating me! Every day I have to pay money. Today, let me play a trick on it! ” thought the tailor. By the time the elephant came near the tailor’s shop, the tailor came out of the shop with his hand closed. The tailor acted as if he was placing the coin in the trunk but actually, he pricked the trunk with the needle which he had in his hand.

The elephant cried with pain. “What happened to you my dear?” asked the mahout. The tailor acted as if he is innocent and went back to continue his work. The elephant, too, left the place but with the pain. The same evening elephant thought of teaching a lesson to the tailor as he was so mean.

The next morning, Mahout came to the elephant and said, “Come on my boy! Let me give your bath and then you can relish on your food, the yummy sugarcane!” The elephant stood still without any reaction. “Boy, what happened? I said sugarcane for your breakfast!” cried the Mahout. But the elephant was thinking about the tailor.

Mahout walked with the elephant. While on the way, the elephant suddenly walked in the different direction. On this, Mahout said, “Hey, that’s not the route to the pond!” The elephant saw a pool of mud and went near it. The Mahout wanted to know where the elephant was going. But the elephant did not hear the words of Mahout. He continued his walk.

Everyone laughed at the tailor. The Mahout said to tailor, “Oh, no! What have you done my boy? Ah, now I understand! Yesterday, you should have played some trick on him. That’s the reason why he has done this to you! At least, from now you learn a lesson and don’t play tricks on anyone!” Also, read The Lion and the Boar.

Mahout took the elephant for a special bath. They both walked while the tailor stood there helplessly.

MORAL: DO NOT EXPECT ANY GOOD IN RETURN OF BAD.

Here is a visual depiction of, “Elephant and Tailor Story”. See the video story below,