The Enchantress And The Apple Tree

This is one of the original fairy tales for kids to read. Once upon a time, there was a widow who had three sons. They wanted to get married soon but in the village, there wasn’t a girl as they wanted. An old woman lived in this village and she was known to be an Enchantress.

One day, the three brothers decided to ask her where they could find their future wives. The eldest brother wanted to have a beautiful wife, the middle brother wanted a rich wife and the youngest brother wanted simply a wife who was in love with him. You may also like to read, The Giving Tree Story. 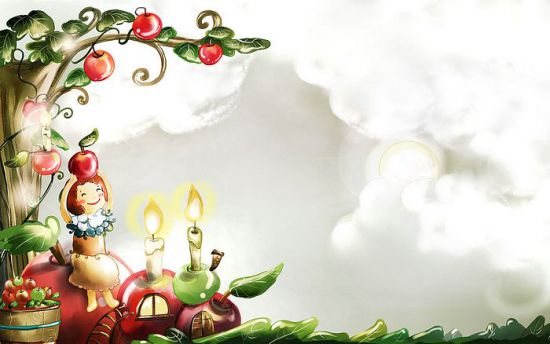 Image Source–> www.desktopwallpaperhd.net. The old lady told them that there was a big apple tree in the garden of a castle. They had to pick the three most beautiful apples from this tree and take them to her. In addition, they had to carry some bread and wine, but not to eat or drink anything.

The next day, they left and walked all day. They were exhausted and the two oldest brothers decided to eat the bread and drink the wine but the youngest didn’t. The second day, they found the tree and picked the three most beautiful apples. Suddenly, the apples opened and the three girls came out.

A beautiful lady asked the oldest brother, “Have you got any bread for me? Could I have some wine?” “No, I haven’t,” he replied and the lady disappeared. The same thing happened when a very rich lady asked the old brother for some bread and wine. When a simple but nice girl asked the youngest brother, he gave her the food because he had not eaten or drunk.

The older brothers started to cry due to their stupidity. The four people went back to the Enchantress. There was a surprise for them because, by her, there were the other two girls. The old woman smiled and said, “Thanks to the kindness and diligence of your brother. I decided to return your future wives.” Eventually, all the brothers were very happy, but the happiest was the youngest brother because beauty fades, richness gives many concerns but true love never disappears. Also, read The Ugly Tree Story.