This is fathers day inspirational stories for the children. Once upon a time, there lived a little boy. This little boy loved to play outdoors. Above all, he loved to go on camping and hiking trips with his father. Every once in a while, his father would take him on a hiking trip.

The little boy looked forward to such trips. One day, the boy and his father packed their bags and left for a hiking trip.  It had been a while since their last trip. And because of that, the boy found himself extremely happy and excited! He could not stop jumping around and so he dashed here and there. Also, read Emily- A Girl Who Couldn’t Fit In. 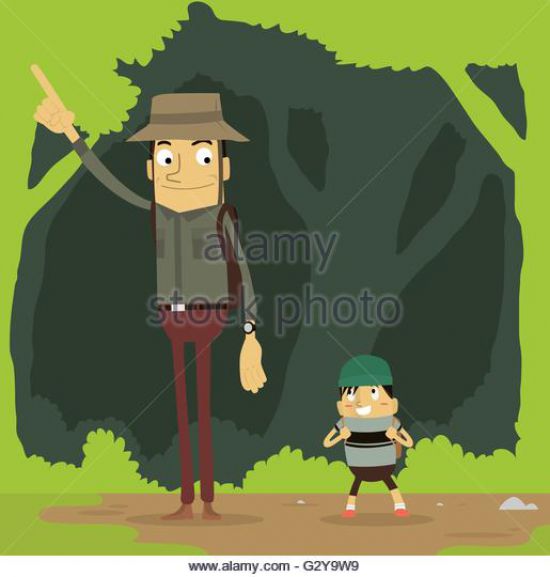 Image Source @ alamy.com. “Be careful,” his father kept calling out, afraid that his son might trip over and hurt himself. And that is exactly what happened! The little boy tripped and scraped his knee as he fell. “Ahh,” he yelped in pain.

Strangely the little boy heard the same thing reverberate through the mountains. Now, this was strange and new to the little boy. He was extremely surprised at this phenomenon. Not knowing exactly what it was, he yelled again. This time he asked, “Who are you?” The little boy got no answer but only heard his words repeated by the strange voice.

More curious than scared, “You are a coward.” And again he heard his words being repeated. Now, the boy became angry. “You come here and show me your face!” Unfortunately, the boy could not see the person repeating his words, but sure did hear those words repeat! The little boy became too frustrated to think of anything.

Luckily, by now his father had found him. He narrated what had happened to his father and then asked, “What his happening? Is someone here with us? I am scared!” His smiled at him and explained. “This phenomenon is known as an echo.” The little boy did not understand anything. “Alright, let’s do something,” suggested the father. He told his son to yell ‘you are a champion!’ You may also like to read, A Father’s Love.

The little boy did so, and he heard his words ring back. Still confused, he looked at his father. His father smiled again and said, “You see our lives are similar to echoes. Echoes are reverberations of your words. Similarly, in our lives, our actions play the same part. Most people do not believe this and end up leading a sad and unfulfilling life. But in reality, you will always get what you spread. So, if you want happiness, you spread happiness to others.”

“Always remember, good things happen to those who do good things. If you make others unhappy, you too will be unhappy,” the father finished. Finally, the little boy understood the underlying meaning of his father’s wise words. He understood the meaning of the echo as well as the role of his actions in his life. Also, read Lisa And Her Mother-In-Law.

The little boy returned from that hiking trip a little wiser than before. And he brought back a valuable lesson from the trip, that he remembered all life long.